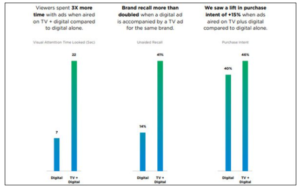 TV plus digital significantly outperforms digital only. A panel-based study by MediaScience and Comcast showed how adding television and digital media improves overall ad campaign performance. In the study, 94% of viewers watched the TV ads, compared to 78% in the digital environment, with TV ads watched 2.7 more times than digital ads (MediaPost: 9/23/20). The study also found that “consumers were 35% more likely to make a purchase of an unknown brand’s product after seeing the ad on TV, compared to those exposed on digital alone.”  (NEXTTV: 9/23/20).

With the holiday shopping season right around the corner, it looks as though Cyber Monday will take center stage. The phenomenon of Black Friday may be near its end as more and more consumers opt to shop online. Major retailers have already announced they will remain closed on Thanksgiving, while others have stated they would cancel Black-Friday and instead offer their best deals throughout November and December (InsideRadio: 9/24/20). According to the NRF 74% of consumers are likely to spread out their holiday shopping over several months. As retailers plan ahead, 52% are expected to advertise sales starting in October (NRF).

The pandemic impacted everything from where we work to the financial climate, but the value of Local TV advertising has remained consistent. A TV Squared report shows that as cross-platform viewing grows, a strong TV presence is crucial to sustaining awareness and engagement, with linear consumption up nearly 30% and digital viewing rising by 40% in recent months. Lockdown saw audiences significantly increase their interest in Local TV viewing, and now with a drive towards impression-based viewing local can take on performance. (Martechseries.com: 9/28/20).

Despite lower than average summer ratings, broadcast network delivery for the year that just concluded (2019/20) was relatively stable when compared to the prior year (2018/19). Broadcast networks averaged a combined 22.15 million viewers in Primetime, adding the two main Spanish-language outlets, Telemundo and Univision brings the total to 24.65 million. These figures are nearly identical to the previous year, which came in at 24.67 million. In late night, CBS’s Late Show With Stephen Colbert lead in both total viewers and the 18-49 demographic. The Late Show averaged 3.44 million viewers, leading its competition, NBC’s Tonight Show Starring Jimmy Fallon (1.92 million) and Jimmy Kimmel Live (1.91 million) by better than 1.5 million viewers. CBS kept its stranglehold on daytime, leading ABC by about 1.25 million people (3.46 million to 2.2.1 million) (The Hollywood Reporter: 9/25/20).

Hosting the premiere episode for Season 46 on October 3rd is none other than SNL alum Chris Rock, who will be joined by musical guest Megan Thee Stallion. The show will premiere in its usual 11:30/10:30c time slot and return to Studio 8H at Rockefeller Center in light of improved COVID-19 conditions. Saturday Night Live’s return will start with 5 consecutive new shows and feature a limited number of people in the audience. There are also some new faces joining the cast along with guest actor Jim Carey to play former Vice President Joe Biden (TV Guide: 9/26/20).