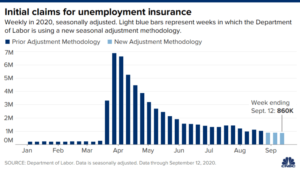 First time claims for unemployment insurance were lower than expected but had little impact on the financial markets. Initial claims for the week ending September 12 came in at 860,000; down 33,000 from the previous week. Continuing unemployment insurance claims also saw a drop, falling 916,000 to 12.63 million, down from the 24.9 million peak in early May. While the pace of claims continues to fall, the totals are still considerably higher than what was seen pre-pandemic (CNBC; 9/17/20).

A survey of advertising executives by Pivotal Research Group shows that advertising demand is continuing to directionally improve or stay the same. While the latest data from August shows a slight dip, the overall trend line has been consistent, moving away from the “deceleration or worsening’, seen following the first months of the pandemic. The August data also shows that demand is improving more for direct response than for brand-focused marketers and agencies. (MediaPost: 9/18/20).

Early voting is expected to spread out political advertising, with estimates of a campaign spending pool that’s as high as $9 billion. Voters casting their ballots before Election Day (either by mail or at local early-voting centers) may top 50%, making the “typical deluge of candidate and referendum commercials during Halloween weekend” meaningless if many have already voted.  (NEXTTV: 9/21/20)

According to Hub Entertainment Research’s annual tracking study of the providers viewers turn to they watch TV, the number of sources each consumer uses surged from 3.0 per viewer in 2018, to 3.7 last year, to 4.8 in April 2020. While the data shows that TV’s home base is becoming more digital, Live TV is still the most common choice among respondents when asked which one they would keep if they could only keep one. Netflix, the number two essential choice, is the default for those under 35, while adults 35+ are more likely to default to Live TV. (TVREV: 9/17/20)

Dozens of students now have their own personal desks to study at while they learn from home. Founded by a husband and wife team who both work full-time in addition to helping their children with virtual learning, “Desks by Dads” started as a weekend project that has exploded in popularity. “We’re just two, busy parents who saw there’s a need and we care about the children and families in our community and we want to help in a very small way,” said Jessica Berrellez. They’ve also shared plans for anyone who wants to make their own desk (ABCNews: 9/21/20).