TV[R]EV (9/10), in partnership with Vizio and iSpot.TV released a report on what “sports audiences are watching when they’re not watching sports”. The free downloadable report uses Vizio’s exclusive Inscape panel data (16 million smart TV’s) and highlights iSpot.tv always-on TV ad measurement and attribution. The NBA lead for time-spent during the measured period (July-August), followed by Good Morning America. NBA also led for ad impressions. More broadly, (October 2019 – August 2020), the study looked at what else viewers of other sports (NBA, MLB, NHL, and NCAA) are watching. 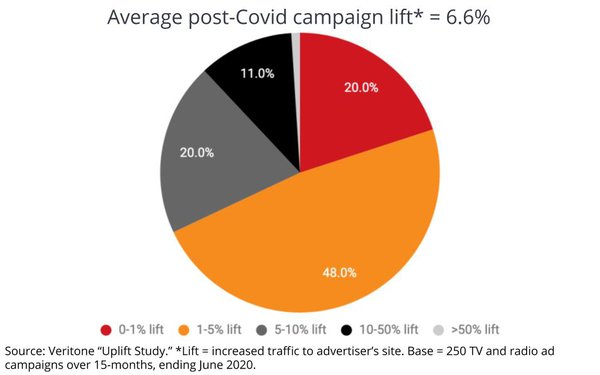 New research released by Veritone shows that TV and Radio ad campaigns performed an average of 7% better during the pandemic than during the measured time period (15 weeks ending June 2020). The study looked at “lift”, which is defined as increased traffic to the advertiser’s website, for over 250 North American ad campaigns. While ad spending may have seen some declines, “consumer response to broadcast ads has not changed significantly.” (Mediapost; 9/15/20.)

The media director of Kantar’s Worldpanel used the company’s blog to ask and answer a question about the risks associated with “stopping or cutting back on advertising during what is now the worst recession on record.” Referencing their global research, the impact could take years to recover from. Conversely, the average short-term sales lift is an incremental 4.5%, which usually takes place the month following a “typical” eight-week campaign (insideradio.com; 9/14/20).

On Tuesday, the Trump campaign announced an “eight-figure” ad buy in states that include NC, FL, GA, MI, MN, WI, AZ and PA. This purchase follows on the campaign’s abrupt cancellation of ads that were to run last week in AZ, NH, and PA, which were attributed to “a broader shift in advertising spending.” (US News; 9/15/20). On Wednesday, the Biden campaign announced a $65 million ad spend in battleground states in what the campaign describes “as its single largest paid media investment” for the candidate (Newsweek; 9/16/20.)

On 9/14, TVNewscheck announced the renewals of long-running properties including seasons 13 and 14 for Dr. Oz across the Fox Station Group, and seven more seasons of “America’s Court with Judge Ross” (distributed by Entertainment Studios with clearance in over 90% US). The following day, they announced that Kate McKinnon will be returning to SNL for the show’s 46th season. Another bright spot is that the shows “entire ensemble will remain intact” when they return with a new in-studio and virtual episode on October 3rd.

With fewer than 45 days until it’s time for trick or treating, now is the perfect time to begin work on the Halloween project you never needed before the pandemic. Introducing “The Candy Slide”, a simple DIY device that keeps germs to a minimum while maintaining social distance. Wicked Makers, the Austin-based duo, shared their simple how-to video with GMA (9/14/20) and according to the nearly 200K people that viewed their video, helped save Halloween.