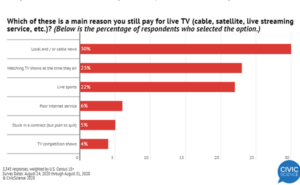 Newly released CivicScience data (9/3), shows that 68% of Americans still pay for “live television programming in one way or another.” Among those that pay, News (30%) is the number one reason, followed by the ability to watch TV shows at the time they air (23%), and live sports (at 22%). The survey, fielded in late August 2020, wasn’t without some surprises. While older viewers, 35+ were more likely to pay for live TV, the youngest category polled, 18-24, was more likely to pay for live TV than 25-34 year-olds.

For the past five years, the consumer insights team at Mars has been conducting “one of the largest neuromarketing studies in the world (thedrum.com; 9/9). The research was conducted to better understand which ads evoke emotions that build memories to be better recalled at purchase. Recalling “the somber, early pandemic ads” they also found that incorporating negative emotions can be a “tricky proposition” and offer six recommendations including making the negativity resolve quickly, presenting the brand “at the moment of highest, positive emotion”, and avoiding jumping on the Covid-19 ad bandwagon.

According to Kagan, a group within S&P Global Market Intelligence, cord-cutters, or those not subscribing to linear pay TV, reached 37% in 2Q20. The article (Nexttv.com; 9/9) compares this figure to 1Q2014 where only 12.5% of broadband homes didn’t use a pay TV service. Further, the report indicates that nearly 30% of homes don’t subscribe to an MVPD (multichannel video programming distributor).

Starting next week, Nancy O’Dell, former co-host of Entertainment Tonight will be joining Meredith’s new magazine show, People (the TV Show!) (Nexttv.com; 9/9). Also new in syndication, The Drew Barrymore Show kicks off on Monday, with a Charlie’s Angels reunion and Adam Sandler; the host’s  50 First Date co-star (Cynopsis; 9/9). And finally, the Tamron Hall season two premiere will be adding a second run on OWN (Deadline; 9/8).

Come 2021, Jay Leno will be hosting a syndicated reboot of the classic game show You Bet Your Life; set to air on FOX TV stations while Byron Allen’s Entertainment Studios is launching three new series (Highway Thru Hell, SOS: How to Survive, and Top 10, all from The Weather Channel (Nexttv.com; 9/9.)

Jimmy Fallon invited “The Tonight Show Aunts” on the show, to share their tips on ways to stay in touch with family during quarantine. Aunt Marth  (“the nervous one”; played by Tina Fey), Aunt Joan (“the kooky one”; Paula Pell), and drunk Aunt Sue (Rachel Dratch) will likely be remembered more for their cringy humor than any evidence of real advice (Today; 9/9/20).