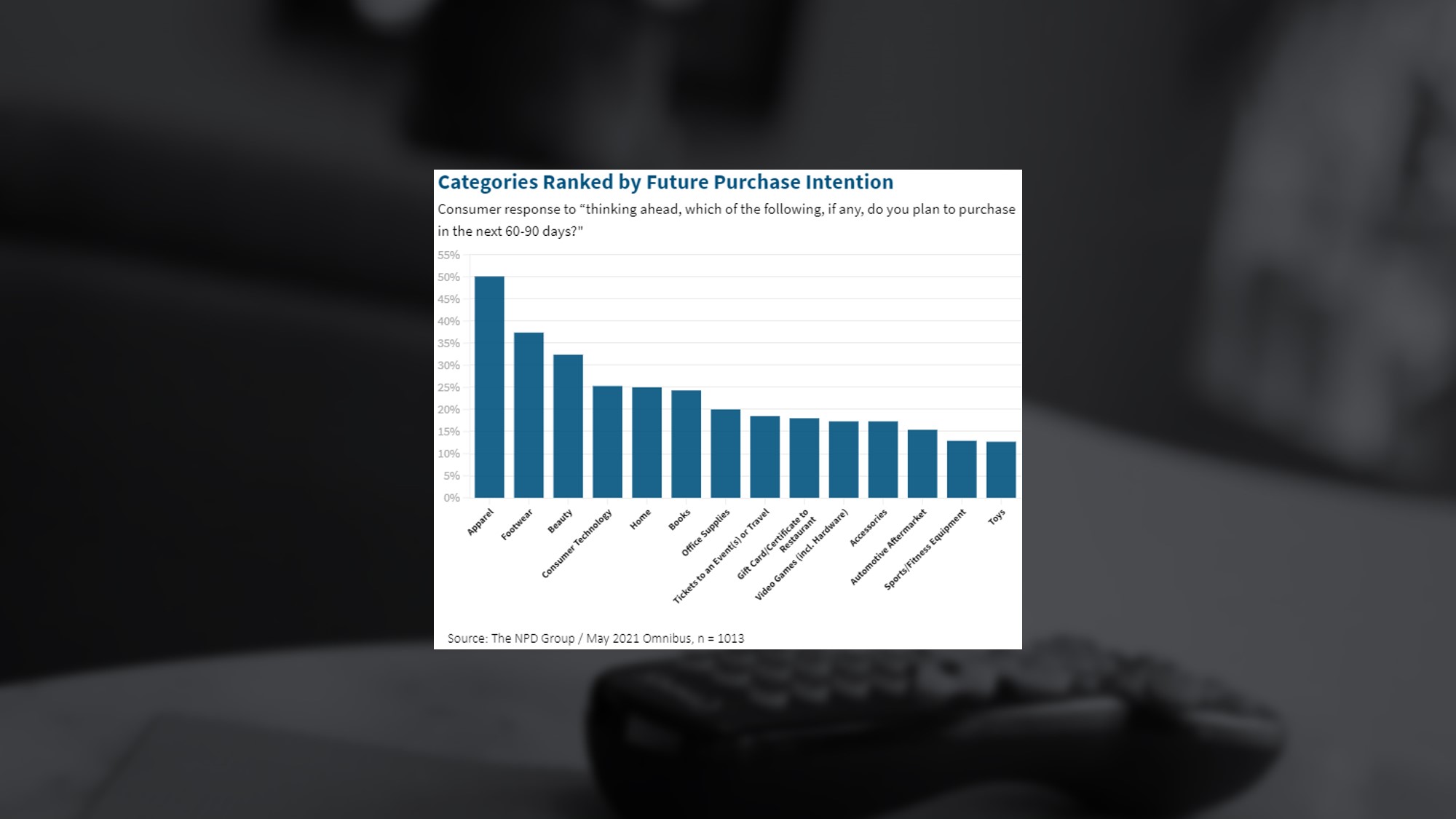 Yelps data reveals that consumer interest in several major categories including restaurants, shopping and travel points to a healthy recovery for local economies. Americans are returning to in-person dining at restaurants, driving a record number of diners seated via Yelp, bouncing back to 86% of 2019 levels with food businesses recovering to 92%. After more than a year of reduced spending, Americans now have the highest level of personal savings since the 1960s and are returning to indoor shopping as local economies reopen. Consumer interest in shopping has almost fully recovered – reaching 92% of March through May 2019 levels, during the same period in 2021. “Homeservices” are also surpassing prepandemic levels with consumer interest at 99% of 2019 levels during the same period. With many consumers opting for road trips and spending more time outside of cities with mass transit hubs, automotive 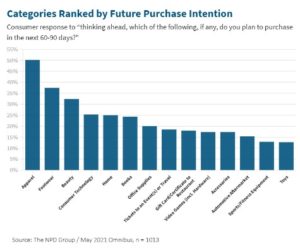 A May 2021 omnibus survey by NPD found that consumers are most likely to purchase discrethanary items in the Apparel, Footwear, Beauty, and Consumer Tech categories within the next 60 to 90 days. Brands and retailers must identify and stay ahead as purchase behaviors have fundamentally changed. “As the consumer engages in social progression…buying the products they need to complement and accessorize [for a more experiential lifestyle] is the main focus.” Sales of women’s dresses were nearly $7 million higher in May 2021 than in May 2019, luggage sales have shown signs of a rebound in recent months reaching 84% of their 2019 levels, and dollar sales of makeup products returned to 78% of their 2019 levels in May 2021. (NPD)

According to a new report from TVision, more and more households are streaming, with ad-supported video is showing some of the biggest gains.  84.4% of U.S. households were able to watch programming on connected TVs in the first quarter up from 82.4% (3rd quarter 2020), and 80.3% (1st quarter 2020). Time spent watching AVOD grew by 200% from May 2020 to May 2021, during the same period SVOD climbed 100%, and linear viewing dropped 13%. As TVision focuses on viewer attention they found that SVOD commands the most attention from viewers, with a 106.5 attention index “The opportunity to make an impact with CTV advertising is significant – it’s why brands are increasing budget allocation in this area.” (NextTV: 6/24/21)

According to a report by BMO Capital Markets, connected TV (CTV) ad spending in the U.S. is projected to hit nearly $21 billion this year; growing at an annual rate of about 23% through 2030. The report surpasses estimates and forecasts recently published by others. BMO is optimistic on the future of CTV advertising for its advanced targeting capabilities down to the individual user or household, and that it’s just beginning to scale. (MediaPost: 6/28/21)

Most viewers (58%) are willing to watch ads, even on Netflix, if it meant they could get a $4 – $5 discount on their subscription service, according to a June 2021 study from Hub Entertainment Research. Hub found that 95% of viewers watch both ad free and at least one ad supported channels. And while 57% of respondents can tolerate ads, an additional 26% report that if they’re “really interested in a show, it doesn’t matter to me if there are ads”, bringing the number to 83%, while only 17% of respondents wouldn’t consider an ad supported service. “What’s clear from these findings is that what matters to consumers is not whether ads are included in the content they watch, but how ads are delivered.” (NextTV: 6/25/21)

There was an organic social media groundswell to get LeVar Burton, beloved star of Roots, Reading Rainbow, and ST:TNG, the shot he wanted at replacing another beloved figure, the late Alex Trebek, as host of Jeopardy! In an interview with The New York Times, he explains that the show “is a cultural touchstone, and for a Black man to occupy that podium is significant. It’s difficult to explain, but there’s something inside me that says this makes sense. I feel like this is what I’m supposed to do.” Mr. Burton also share stories about his meetings with fellow icons Steve McQueen and Fred Rogers. (NewYorkTimes: 6/25/21)

Need some inspiration for your Independence Day feast? The Today Show has you covered with 50 recipes to celebrate the holiday. Step up your Fourth of July spread with these desserts, drinks, sides, salads and barbecue recipes. (Today Show: 6/15/21)