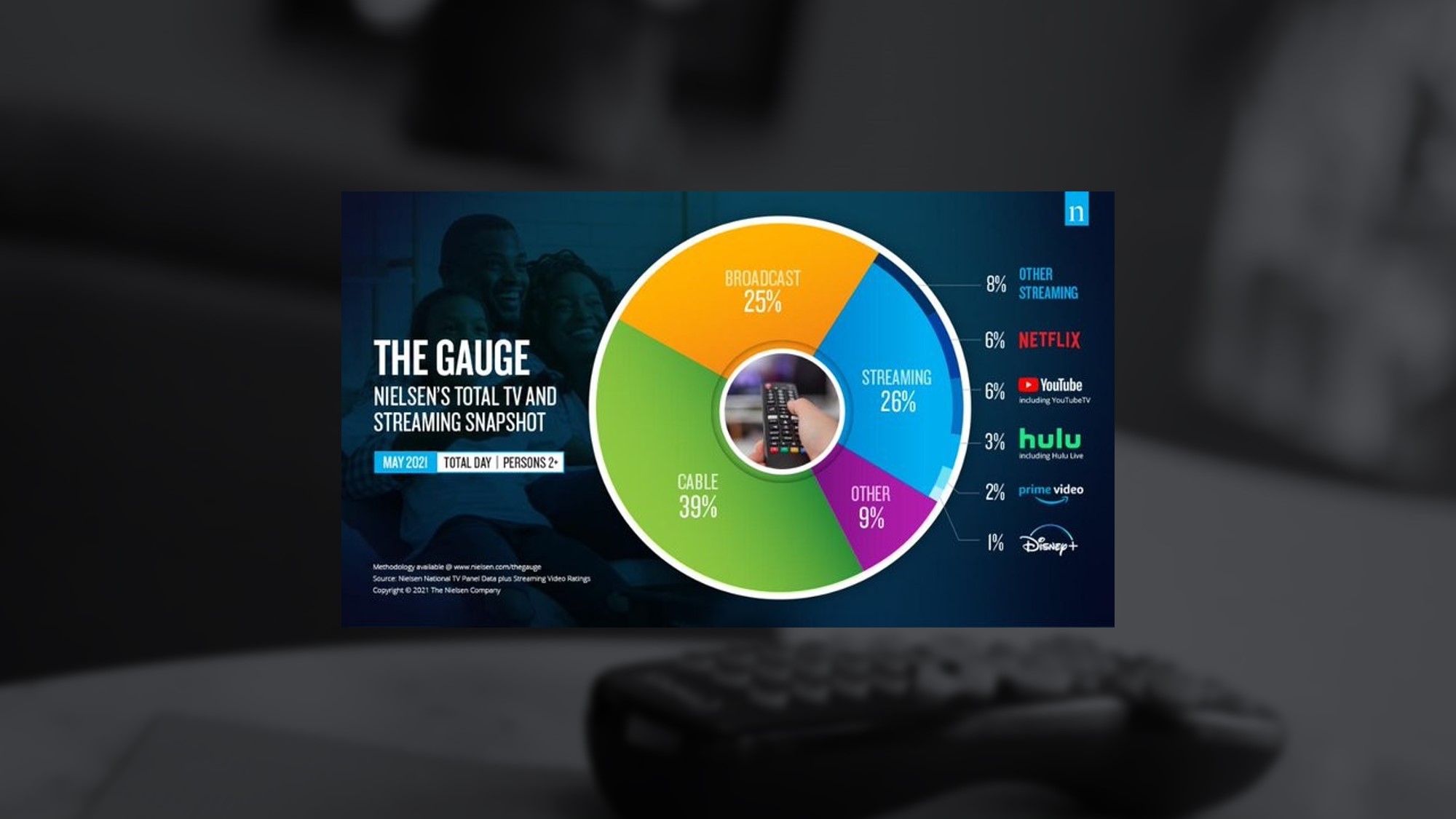 According to a new “enriched database” from Standard Media Index, U.S. ad spending continued to rebound in May. The new data shows the U.S. ad market surged 56% in May, following a 53% gain in April, and a 22% increase in March, which was the first to show a year-over-year rebound from the pandemic influenced advertising recession. The data reveals most media platforms have benefited from the rebound, with the exception of magazines. The biggest media increases came from out-of-home and radio. “SMI estimates its expanded pool now empirically represents 94% of national ad spending, based on nearly $90 billion in U.S. ad spending processed by the major agencies.” (MediaPost: 6/18/21) 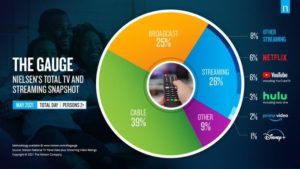 Nielsen announced their new metric, The Gauge, which makes an apples-to-apples comparison, on a percentage basis, of how many people are streaming shows and films on their TVs versus how many are watching traditional cable and broadcast channels. The Gauge relies on audio-recognition software included in Nielsen devices that are now in 38,000 households across the country. Over the last two years, Nielsen’s developed and rolled out new technology at the Wi-Fi router level so, for the homes in the Nielsen panel, they now have an accurate view of internet viewing, including Netflix and YouTube. Though Nielsen reports people are spending more time watching TV the old-fashioned way, streaming is catching up fast. The firm anticipates the streaming share increase to about 33% by the end of the year. Netflix and YouTube are the streaming leaders, Nielsen said, with each capturing 6% of total TV time, trailing are Hulu (3%), Amazon (2%) and Disney+ (1%). (NewYorkTimes: 6/17/21)

Nielsen’s first comprehensive overview of the video landscape compared the total audience share of cable TV, broadcast TV and streaming video. The initial data, covering May 2021, found streaming video (including SVOD and AVOD), accounted for 26% of all viewing, slightly greater than broadcast TV (25%). Cable TV (including ad supported and premium pay) had the highest audience share at 39%, with the remaining 9% categorized as “other” and including video gaming console usage as well as “all other television” among other video originators. With increased options, viewer adoption of streaming services has been on the rise as well. According to Park Associates, at the end of first quarter 2021, 46% of U.S. broadband homes subscribed to four or more streaming services, more than twice the 22% reported at the end of first quarter 2020. In addition, 82% of U.S. broadband homes subscribe to at least one SVOD service, a year-over-year increase from 76%. (Forbes: 6/17/21)

Reaching ad-free streamers has become the latest challenge for marketers with carefully crafted TV campaigns. The 2021 Gfk Media Comparison study found 42% of adult respondents (18+) streamed programming on platforms without advertising; that number goes up to 59% for car buyers and 61% for parents. Social media reached 73% of adult 18+ ad-free streamers and online search reached 68%. The highest reach for ad-free streamers is linear television (broadcast and cable TV at a combined 83.2%), with broadcast TV alone reaching 82.7%. GfK Media Comparisons Study found that marketers and advertisers have to harness the power of broadcast TV and broadcast TV websites and apps to reach the majority of non-ad streamers in order to connect with this elusive target on a large scale and in a trusted environment. (ANA: 6/15/21)

Chadwick Boseman’s death last year and a family history of colon cancer, led science reporter, Nicholas St. Fleur, to get a colonoscopy; documenting it in the process, in an effort to highlight the need for screening and to help eliminate the associated stigma. Colon cancer is the third leading cause of cancer-related deaths in men and women, with Black Americans having a 20% higher chance of getting the disease, and a 40% mortality rate than other groups. As a wrap-up to the FDA’s National Black Family Cancer Awareness Week, the report reinforces the ease and effectiveness at-home screenings while catching it early is the key to survival (GMA; 6/22/21).