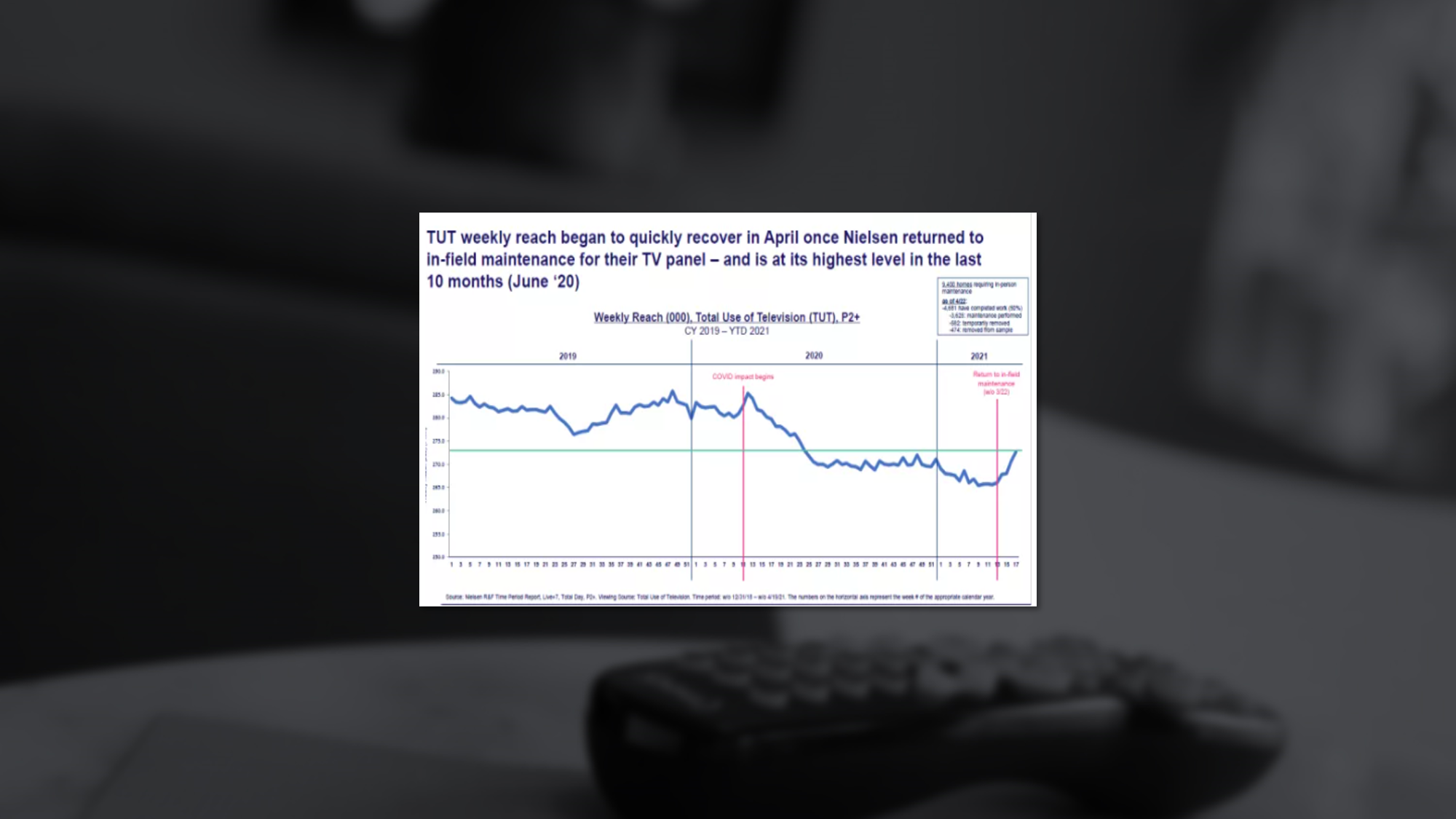 Data from Comscore contradicts Nielsen’s metrics showing that TV usage went down during the pandemic. Nielsen’s data has been criticized by networks and distributors represented by VAB that contends Nielsen was under-reporting TV usage due to faulty reporting from homes in the Nielsen sample. Comscore’s data shows total household’s ratings were stable from March 2020 through March 2021, falling a bit more recently. As the world is getting back to work and kids are back in school, they’ve seen declines. Comscore relies on “big data” from millions of cable set-top boxes to measure viewing, while Nielsen relies more heavily on its panel of viewers. (NextTV: 5/10/21)

Similarly, the Media Rating Council (MRC), an “organization that maintains research standards for the media industry, found a generally consistent pattern of underreporting of viewing” when looking at Nielsen’s February 2021 TV usage numbers. In a report released earlier this week, the MRC found that TV usage among adults 18-49 may have been undercounted by 2% to much as 6%; translating to low-end estimates in the tens of millions of dollars in one month, alone. (Variety; 5/10/21) 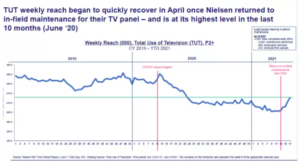 VAB reported that since at home servicing resumed in Nielsen TV usage has noticeably picked up. VAB recently reported that 9,400 homes in Nielsen’s sample weren’t properly supervised, earlier in the pandemic. As of April 2021, Nielsen’s Total Homes Using Television measure, has already started to reverse from the declines throughout 2020. Nielsen reiterated that it is working with the MRC to answer the industry’s questions about viewership during COVID. (NextTV: 5/6/21)

Last year COVID-19 paused TV productions and wreaked havoc on live sports, disrupting the 2020 upfront. This year’s upfront, however, is expected to bounce back, with more ad dollars migrating to streaming platforms. Vendors like NBCU anticipate viewership to be 70% for broadcast and cable, and 30% for their digital properties including Peacock and the company’s apps. In two years, they see that number being a 50/50 split. Meanwhile, buyers report that upfront commitments are expected to increase 4% to 6% from last year, with one firm estimating 9.3% growth in TV ad spending vs. 2020. (WSJ: 5/7/21)

Three major trends that are being tracked through this week’s Newfronts: original ad-supported content, shoppable TV ads, and short-form video. Both Roku and Tubi unveiled their first real slate of original content, while Twitter signed deals with the NBA, WNBA, and NHL for live sports content. Amazon announced that its beta testing ads allowing viewers to make direct purchases on IMDb TV, Condé Nast on the other hand unveiled they are focusing on three shoppable series, blending content and commerce. Snapchat announced a new creator marketplace, and while TikTok already had a creator marketplace, they are focused on ramping up advertiser awareness on how to leverage its wide base of creators. (eMarketer: 5/7/21)

The increase in TV outlets and calls for more inclusive content have been “a boon for Diverse Voices among novelists.” One of the featured authors, Kwana Jackson was thrilled to find out her book “Real Men Knit” was being optioned as a potential TV series. Jackson, who strives to write stories “that portray Black and other ethnic characters fully, both in conflict and love, believes such depictions on TV have the power to chip away at stereotypes and build empathy.”  “We need to change that perception of how we’ve been shown. We are just like anyone else, with real stories, real love, real joy, real problems,” she said. (TVNewsCheck: 5/7/21)