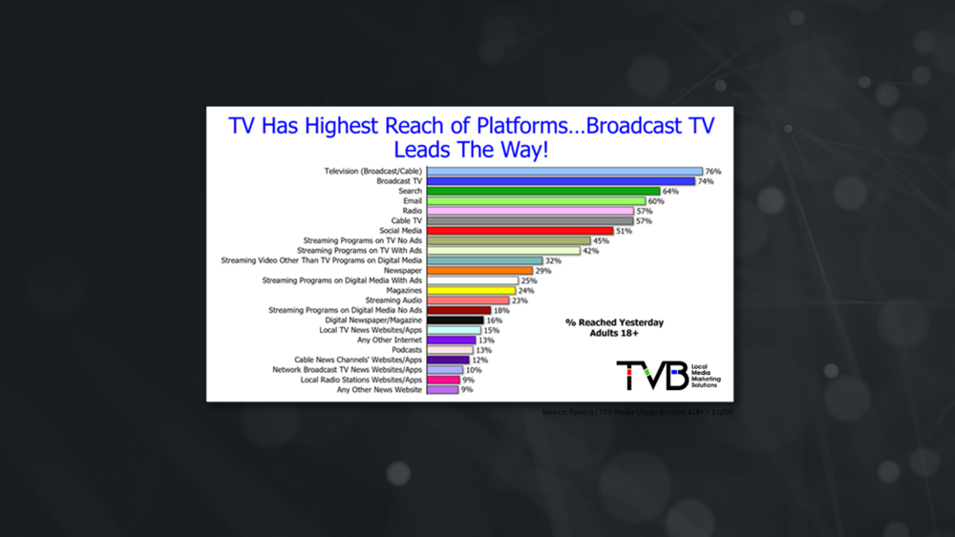 From concert attendance to gym measurements and airline travel, consumers are shifting to pre-pandemic activities. According to IRI, with more people going out in public, they’re spending more on deodorant, tooth whiteners, razors, and cosmetics. Conversely, “pandemic stars” like home exercise equipment and an online grocery platform have taken a hit. Even Netflix, faced with its “first membership decline in a decade, is considering offering a lower-priced ad-supported version.” Some changes brought about by the pandemic appear to be longer-lasting, including teleconferencing, and the future of commercial real estate. (The Wall Street Journal: 5/4/22) 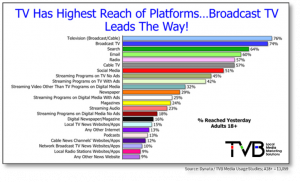 A media usage study in battleground states conducted by Dynata for the TVB “found that TV has the largest reach (76%), with broadcast leading the way at 74%. The report looked at individual states, party affiliation, and key demographics (A18-34, A35+, men, women, African Americans, and Hispanics). In each case, TV led with the highest reach. The study also found that TV is #1 “for motivating viewers to get out and vote” with 74% in agreement. For “Trust in News”, Local Broadcast TV led with 79% in agreement. (TVTech: 5/4/22)

The TVB also released their 2022 American Conversation Study (conducted by engagement labs) which looked at media’s impact on word of mouth and gauged voter “perceptions ahead of the midterms.” In addition to finding that TV is “key to sparking and supporting conversations” about news and politics, they report that “Television affects 56% of political conversations” (significantly more than online, social, print or radio) and that “Local broadcast TV news is the primary source of news. (TVB.org & TVTech: 5/4/22)

AD SPENDING: TRADITIONAL IN THE MIX

A trio of recent studies show that “marketers appear to be returning to traditional media”. The latest CMO Survey (2/22) predicts an increase of 1.4% to 2.9% for traditional media, and “companies that earn 100% of sales through the internet” lead the charge with an 11.7% increase in traditional ad spending in the next 12 months. An Ebiquity study, confirms that “traditional channels – TV, radio and print” outperformed digital on measures of “reach, attention and engagement, relative to costs.” And a Marketing Sherpa survey revealed print, TV, direct mail, and radio – all traditional – to be the top trusted formats. With third-party cookies being phased out on browsers, “the death of cookies appears imminent”. As a result, “the CMO survey found 19.8% of companies invested more in traditional advertising.” (MediaPost: 5/4/22)

More than a quarter of FOX and NBC’s primetime ratings this season come from live sports, while “ABC and CBS are less dependent” on sports. This “outsized effect” that sports has on audiences is a factor in skyrocketing programming rights, as live sports continue to be a “reliable way to get people to watch linear TV (and the commercials that come with it.)” According to a THR analysis of season-to-date viewership, 36.9% of Fox viewers and 28.1% of NBC viewers come from sports. For CBS it’s only 8.5% and for ABC it’s 1.1%. (THR: 5/9/22)

AND THE EMMY (NOMINATION) GOES TO …