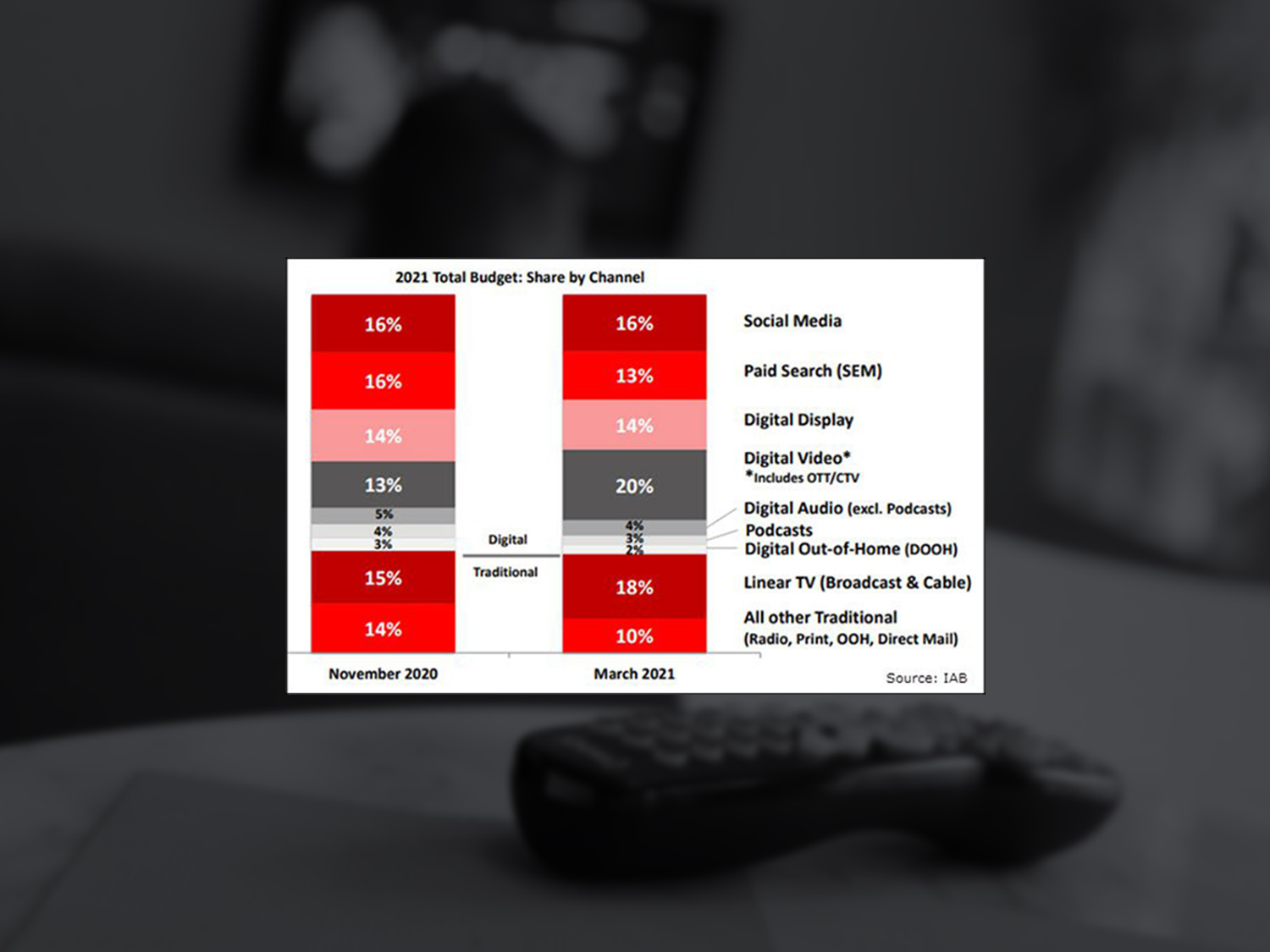 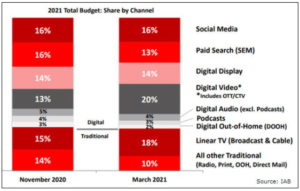 Media Buyers who were surveyed by the Interactive Advertising Bureau at the end of this year’s first quarter, plan on increasing domestic digital video (CTV/OTT included) by 20%, when compared to their responses from November 2020. Linear TV is also expected to increase, commanding an 18% share of total media spend. Conversely, other traditional media, are expected to drop from 14% to 10%. In a question on Linear TV investment, 63% of respondents will either match or surpass their 2020 upfront and scatter budgets. And finally, when asked specifically about 2021 plans for Digital Video OTT & CTV, 93% will be allocating more or the same to programmatic, followed by digital newfront purchases (84%), the scatter market (69%), and the traditional TV upfront (63%). (MediaPost: 4/23/21)

DTCs take the lead on cross-platform TV position, employing of “test and learn” strategies, around-the-clock measurement, regular optimization, audience intelligence and hyper-targeting. While traditional advertisers have seen TV as a vehicle for reach and brand building, now they want much more including: leveraging video delivered across screens to drive sales, new customer acquisition and reach extension. DTCs are also learning from the experience and scale of established traditional advertisers who have been leveraging TV to build brand awareness for generations as well as to find more impactful reach-and-frequency strategies. (AdExchanger: 4/22/21)

The 300th episode of Tamron Hall (April 14th) contributed to a strong week for the sophomore talk show, ending the week (through 4/18) with a 14% ratings increase among households, and a 33% increase for the key W25-54 demo. Other areas for syndicated reach include Live with Kelly and Ryan and Dr. Phil, both leading the talk show ratings impact with a 1.7 HH rating. Among court shows, Judge Judy leads for the 1,282nd consecutive week with a 2% growth from the week before and a 4.9 rating. For the game shows, Jeopardy! saw gains with guest host Aaron Rodgers, as did Wheel of Fortune and Family Feud. And finally, ET and Inside Edition led among the “magazines” with a 2.2 rating. (TVNewscheck: 4/27/21)

The crew aboard the International Space Station grew to 11 astronauts, its largest crowd in a decade, with the arrival of the SpaceX flight team. With representation from the U.S., Russia, Japan and France, the ISS occupants managed to squeeze into camera view for a congratulatory call from the leaders of their space agencies, including the President of the Japanese Space Agency who said “In this tough situation around the world, I believe you have brought courage and hope for all of us,” But first, the “jubilant arrival” included a round of hugs for everyone. (CBS7.com; 4/24/21)