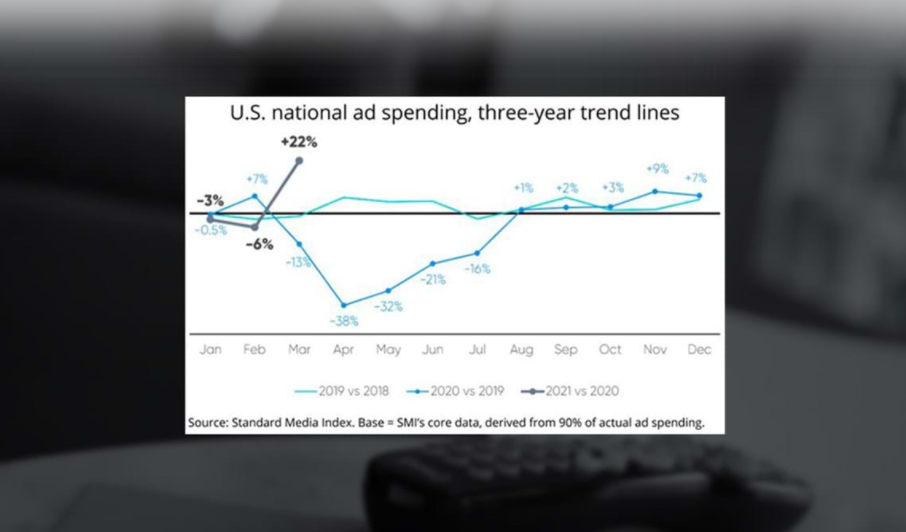 With stimulus checks landing in consumer bank accounts and COVID-19 vaccinations available to the public, retail sales rebounded with huge gains in March. According to the latest report from the National Retail Federation, March saw an 18% year over year increase in retail sales driving an economic rebound that should continue through the remainder of 2021. Excluding automobile dealers, gasoline stations and restaurants to focus on core retail, the NRF showed March retail sales were up 17.7% unadjusted year-over-year. NRF further forecasts that 2021 retail sales will increase between 6.5% and 8.2% over 2020, for a total between $4.33 trillion and $4.4 trillion. (InsideRadio: 4/19/21) 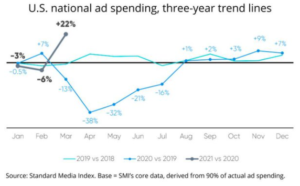 National ad spending expanded 22% in March 2021 vs. a 13% contraction in March 2020. Data from Standard Media Index’s core database, which represents 90% of U.S. national spending indicates that the “U.S. ad industry is back on firm footing, and then some.” TV ad spending, which shows demand for TV ad inventory has also rebounded, with a 13% gain. SMI’s update also indicates U.S. digital ad spending expanded 27% in March vs. the same month last year. (MediaPost: 4/16/21)

In a Senate hearing on how vaccine information is communicated, the testimony from NAB President and CEO, cited research that local broadcasters are “the most reliable and trustworthy information source.” He explained that local broadcasters have been keeping communities informed since the beginning of the pandemic, and now with vaccine availability and distribution. Smith’s testimony also reinforced that broadcasters are eager to work with government agencies, public health and medical communities to bring forth the most accurate information to their viewers. NAB partnered with Reynolds Journalism in a recent study that found people trusted local news to be the best source of information, with social media being the least trusted. Broadcast TV and radio stations were also found to be the best message carriers to reach vulnerable populations with the highest reach of all media types at more than 90% of households. (TVTech: 4/15/21)

As the 2020 pandemic impacted the entertainment industry, movie theatres and production studios temporarily closed, pushing viewers to watch premium TV and movies across various screens and providers. The entire global theatrical and home/mobile entertainment market totaled $80.8 billion in 2020, the lowest figure since 2016 and a decline of 18% from 2019. The pandemic also impacted Netflix which saw 12% fewer original shows than 2019. TV remained the primary screen for viewing video, accounting for 62% of time spent, down 4% from 2019. However, that was offset by the increase in connected TV device viewing (e.g. Roku, Fire TV, etc.) at 17% in 2020 (up 4 percentage points from 13% in 2019). Time spent viewing OTT grew as well, up 34%, and surpassing one hour for the first time. (Forbes: 4/13/21)

THIS IS LEVAR BURTON

Following an “uproarious” social media push to have “Reading Rainbow” and “Star Trek” star LeVar Burton take the hosting podium on “Jeopardy!”, the actor has been announced along with four other guest hosts rounding out the show’s 37th season in the wake of the death of beloved “Jeopardy!” host Alex Trebek last November. Also named as hosts are GMA’s George Stephanopoulos and Robin Roberts, CNBC’s “Squawk on the Street” co-anchor David Faber, and sports commentator Joe Buck. (Variety; 4/21/21)