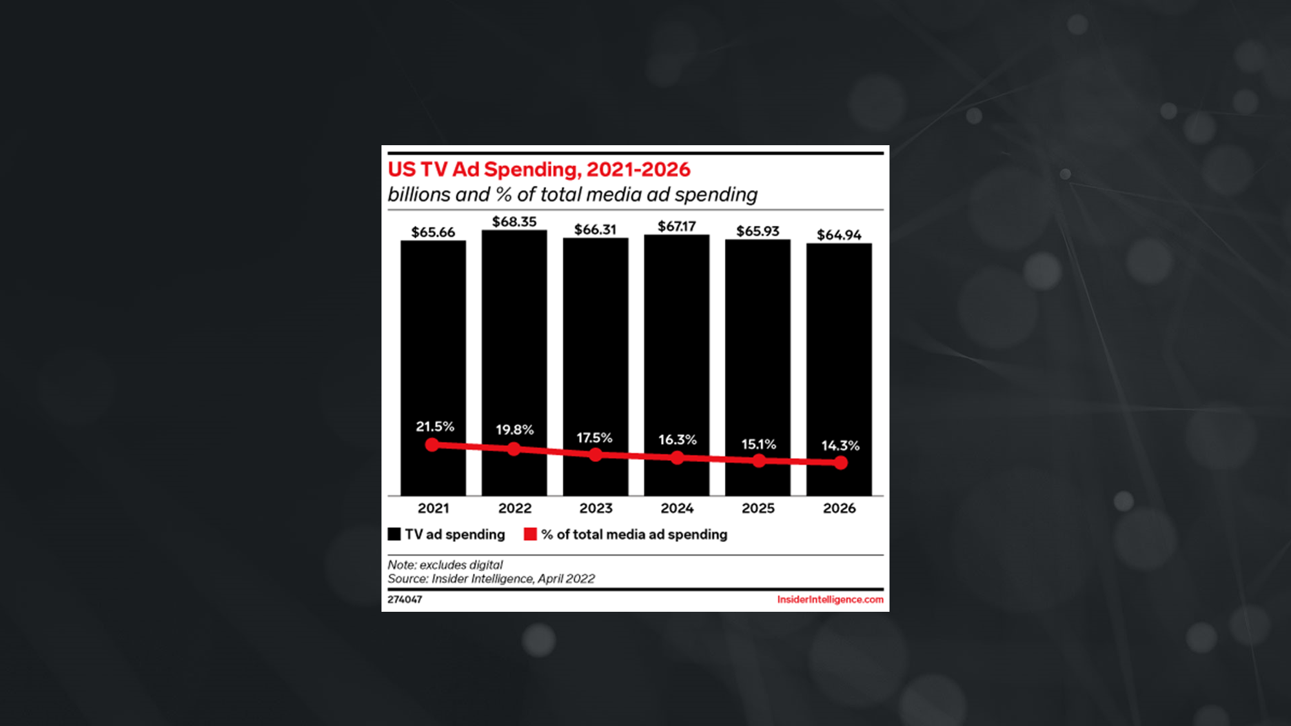 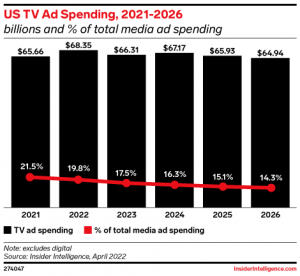 “As viewers migrate to digital video, so will ad dollars.” eMarketer suggests that US spending on linear TV ads has hit its peak this year, reaching $68.35 billion, and is predicted to “not surpass $68 billion again for the next four years.” US households are making the switch to using digital video which has significantly impacted the US ad market. It’s estimated that US video ad spending will exceed TV ad spending “by about $8 billion and making up 22.0% of the overall ad market.” (eMarketer: 4/12/22)

In an effort “To reach more people — including those made cost-sensitive by high inflation and subscription overload” more streamers are coming around to the idea of ad-supported options. Just last week, Amazon’s advertising-supported Freevee (formerly IMDb TV) announced plans to expand its programming. And over at HBO Max, their commercial version has had the same number of subscribers as their ad-free tier since January. However, the biggest surprises are coming from Disney+ and Netflix, which have both expressed a “change of heart about commercials.” (The New York Times: 4/19/22)

Most consumers avoid using their Roku or Amazon Fire TV when signing up for streaming services. According to media measurement and analytics company, Antenna, “64% of subscribers signed up for the top-ten streaming services directly via those streamers’ company websites.” As a result, streamers like Netflix avoid paying fees to the device manufacturers. Roku is also at risk of losing leverage due to the merger of Warner Bros and Discovery, “which should make it harder to monetize HBO Max/Discovery+ during the next distribution agreement, perhaps due in a few years.” (MediaPost: 4/14/22) 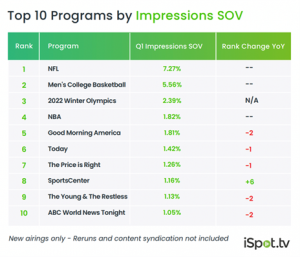 New insights from iSpot found that live sports accounted for over 20% of first quarter “TV ad impressions on new-airing programming”, thanks to the NFL, NCAA Basketball, and the Winter Olympics. Theatrical releases are up over 100% over Q1 2021, and travel is making a comeback, rising 157% YOY. In addition to tent-pole and sports (SportsCenter) programming, news (Good Morning America, The Today Show, and ABC World News Tonight) and daytime (The Young & The Restless and The Price is Right) rounded out the top ten programs with “new airings”.  And while overall quarterly TV ad impressions were up 9% (YOY), spending was up nearly 37% from the tent-pole activity. (TVRev: 4/19/22, iSpot: 4/15/22)

After eight impactful seasons, Black-ish said goodbye in the finale that aired this week. This lookback from Good Morning America at the show’s lasting legacy highlights the guests (GMA’s Michael Strahan made an appearance), the awards, and the “incisive writing and outstanding performances bridging the gap between tough timely issues and comedy.” Fortunately, there’s still streaming, syndication and spin-offs. (GMA: 4/20/22)