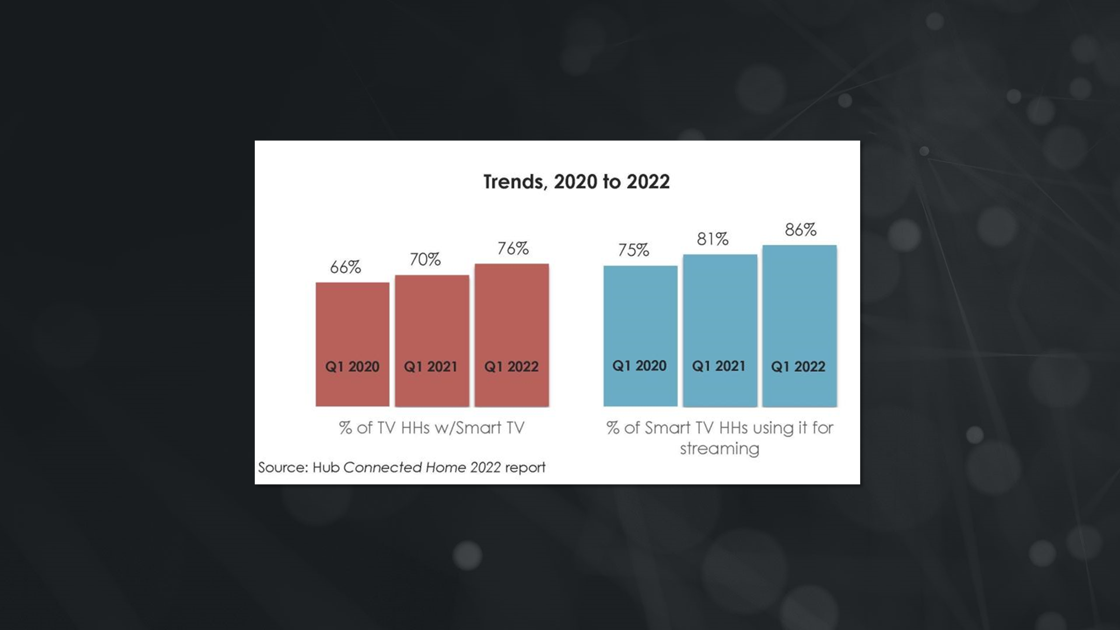 According to Mastercard Spending Pulse (which reports on national retail sales across all payment types), US non-auto retail sales increased 8.4% year-over-year for the month of March (not adjusting for inflation); an 18% increase over 2019 (pre-pandemic). These metrics are similar to February’s year-over-year growth and “slightly above January”. “Diversification of consumer spending across sectors and channels” was noted, with increases for services: airlines (+44.8%), restaurants (+19.1%), and lodging (+6.4%). However, luxury (+27.1%), apparel (+16.%), and department stores (+14%) saw growth. And while e-commerce fell 3.3% year-over-year in March, it was up 83.7% vs. pre-pandemic. (Inside Radio: 4/11/22) 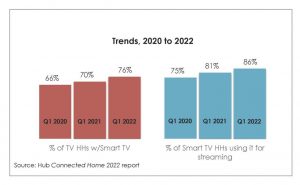 In their 4th annual “Connected Home” study, Hub Entertainment Research found that 76% of all TV households own a Smart TV; up 70% from last year. Additionally, the majority of all TV sets (57%) are “smart”; vs. only 45% in 2020. These ownership changes are fueling the way people view and access video, with 86% of smart TV homes regularly streaming programming through their built-in capabilities; a notable jump over 2020, when it was 75%. Of note, however, this means that 14% of Smart TV homes (or 1 in 7) still aren’t using their sets to stream programming. (TVTechnology: 4/7/22)

According to Nielsen, live TV “still has a commanding position over new streaming technology” with twice the viewership for “live TV-delivered set-top-box/over-the-air content: vs. “TV-connected-delivery devices.” In 4Q21, adults spent, on average 2 hours and 53 minutes each day, watching live TV-delivered programming, while only 1 hour and 22 minutes watching connected-TV delivered devices. Time-shifted TV-delivered programming accounted for another 34 minutes, bringing total daily viewership to 4 hours and 49 minutes each day. Of note, streaming grew in February 2022; up 18% “to 169.4 billion minutes versus the same month the previous year.” (MediaPost: April 8, 2022)

CATCHING UP WITH CRAIG ROBINSON

Actor Craig Robinson shares details of his two big upcoming projects; “Killing It.” (on Peacock) and “The Bad Guys” (in theaters). He also talks about the lasting impact of “The Office” and “Brooklyn 99” saying, “It’s like you have friends everywhere you go”. (Today Show: 4/12/22)