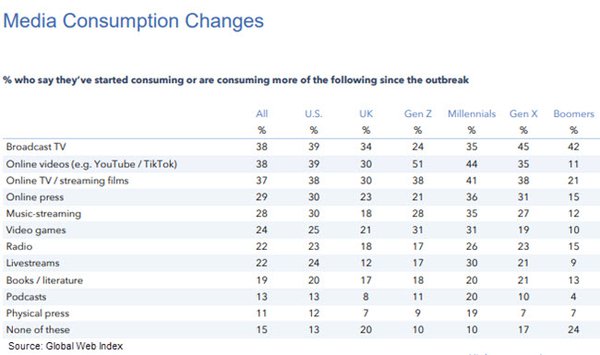 CROSS PLATFORM In a Mediapost (4/14) article on media usage, it’s no surprise that we’re all watching more, according to a survey by the Global Web index. 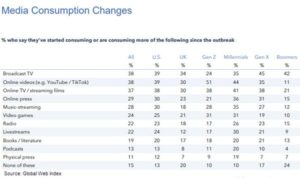 While increases in Broadcast TV are the highest for both the US and the UK overall, and among older demographics (ie Gen X and Boomers), younger audiences (Millennials and Gen Z) tend to gravitate to more Youtube, TikTok, and online TV/films.  and Online TV/Films movies.

ADVERTISING IMPACT Respondents to the second wave of the biweekly Advertiser Perceptions Coronavirus Effect on Advertising Report anticipate a greater negative impact on budgets when compared to wave 1. The top indicators for resuming advertising revolve around “the coronavirus – not the markets” (e.g. relaxing social distancing, slowing the growth of/no new cases in US, Coronavirus no longer dominating the news cycle, lifting travel restrictions.) In their article on report, Broadcasting & Cable (4/13) reported that while “64% have held back media spending, 24% of advertisers said they have launched a new campaign to respond to the crisis.”

TV NEWS Adweek (4/10) reported on the Pew Research Center Study, found that 70% of U.S. adults say news media has covered COVID-19 ‘very well’ or ‘somewhat well’. Overall, 57% of adults polled reported that they were following the coverage very closely, followed by 35% saying “fairly closely”; differing somewhat from last weeks release of  Knight Foundation Gallup poll saying that “97% had heard ‘a great deal’ or ‘quite a lot’ about the virus.”

ADVANCED TV Comscore (4/8) released a report that video on demand transactions increased 30%, vs. 2019 during the month of March. On average, the average U.S. household watched 16 on-demand titles in March while fitness content up 147%. Comscore GM Activation Rachel Ganz briefly spoke with BeetTV (4/13) for more insight on the advertiser need for agility and attention to the tone of their messaging.  Given that stay at home orders didn’t begin taking place until March 19th (with California), we may see further increases. As an aside, this New York Times link to each state-issued stay-at-home order (and other potential changes?) is a handy reference for the number of households impacted as well as the regulation effect dates

PROGRAMMING Syndicators and local stations are partnering to provide new daily programming. For example, B&C (4/14) reports how Fox TV Stations are keeping  content fresh by airing ‘Extra,’ ‘TMZ’ (both distributed by Warner Bros.) and ‘Dr. Oz,’ (Sony) to help alleviate gaps in production due to the pandemic.

The Wrap (4/14) has published their Spring TV 2020: Premiere Dates for New and Returning Shows along with photos for 61 broadcast, cable and streaming series. This serves as a complement to their Fall TV 2020: “Every Broadcast Show Canceled, Renewed and Ordered” which is continually updated as well. For a different take and the inclusion of summer premieres, the summary from Metacritic includes reviews, rankings, summaries (where available), and links to trailers. Have another favorite? Let us know!