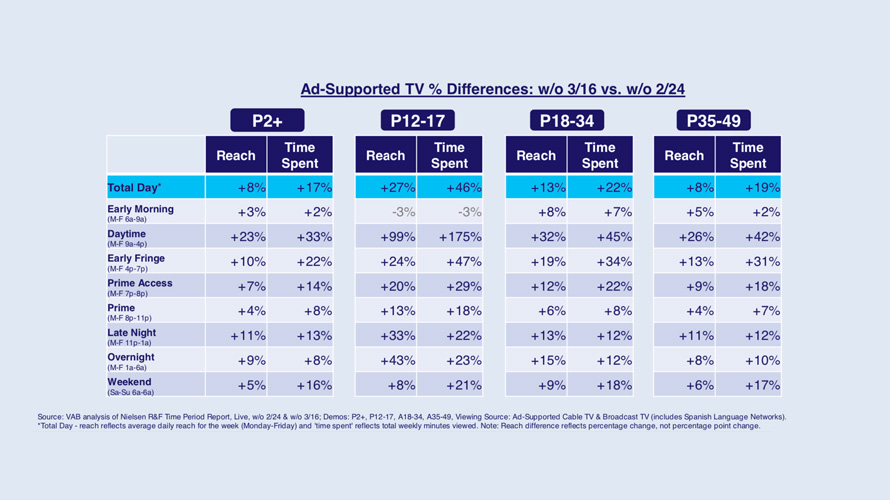 The TVB updated their “Broadcast TV Viewership During Coronavirus” with data through all four weeks of March. Taking a look at 25 LPM markets and a variety of adult and young adult targets (A18+, A18-34, and A25-54), the topline report shows that overall viewership increased vs. last March with the most dramatic increases in news (especially evening news) and among Adults 18-34. And finally, even without Live Sports, Live viewing is up. The last two weeks of the month saw the greatest lift vs. the previous year.

Another great resource are the ANA’s Daily Drop Webinars. A new series launched “launched for these extraordinary times to help keep marketers in touch and informed.” They’re held Monday through Friday, starting at 1PM each day. While capacity is limited, all of the sessions are available on-demand. Tomorrow’s (Thursday) installment, with Fizz CEO Ted Wright, “explores what marketers need to do to stay relevant and drive loyalty during a time of global uncertainty.”

Marketers can learn from each other in near-real time, with the content being written on their responses and communication during the pandemic. An article in TIME (4/6) profiles Hotels.com telling people to stay home, the shift by LVMH to making hand sanitizers, and the Bud spot toasting to next year’s St. Patrick’s Day Parade. Guidance from HBR (4/6) and Forbes (4/1) speak to tone, simplicity, flexibility and transparency when engaging with audiences. 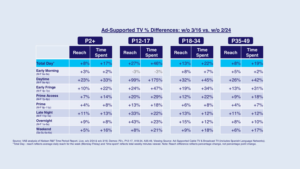 The article in Broadcasting & Cable (4/6) suggests rethinking daypart strategies by reaching viewers who crave news. They also highlight that some brands are taking practical steps to keep consumers safe while others are focused on contributing to relief efforts.

The media research company, Kagan, fielded a media consumption study the last weekend of March. From a report in RBR (4/3), 1,000 respondents were asked about their changes in behavior including the loss of live sports and what they’re streaming. Only a quarter of sports fans are watching old games on TV; most are keeping the TV on and watching something else. Hulu topped the list as the streaming service viewers would most likely add. However, when asked about which bill would be the first to be cut – mobile phone, cable, home broadband or streaming video – streaming video was seen as most vulnerable at 37% opting out, with cable tv at 28%.

An article in Friday’s New York Times (4/3) balances the current challenges faced by advertisers and platforms. While overall spending is down, marketers like State Farm are finding new ways to partner with programs like The Tonight Show, with an announcer read by Jimmy Fallon and homemade signage (written by his daughter). With news coverage taking center stage, publishers like The Guardian and Daily Mail wrote an open letter to marketers that “Readers are relying on us right now, and we are relying on advertising.”

Starting this past Monday (4/6), The Kelly Clarkson Show began adding new content, according to Broadcasting & Cable. From her ranch in Montana, Clarkson recorded segments like “Message from Montana” (added to shows daily) and “Summer Studio Sessions” (launching in June). Clarkson will also feature remote interviews, Kellyoke, and interviews with Justin Timberlake and Anna Kendrick, stars of the new Trolls World Tour; premiering on Friday 4/10.

One of the brightest moments these past few weeks was the debut of John Krasinski’s Some Good News. Episode Two, which came out yesterday, doesn’t disappoint. with Emily Blunt, Robert De Niro, Lin-Manuel Maranda and the cast of Hamilton.