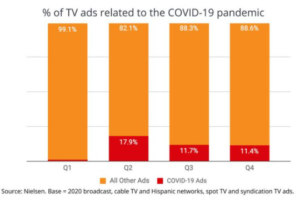 During the second quarter of 2020, COVID-19 ads peaked with nearly 1 in 5 of all U.S. national TV advertising related in some way to the crisis. The analysis, which was provided by Nielsen’s Senior Vice President-Product Management Ad Intel Heather Jordan, shows that COVID-19 related campaigns climbed from less than 1% during the first quarter of 2020, peaked at 17.9% in the second quarter and began ebbing to under 12% during the second half of the year. The data also revealed how quickly major U.S. TV advertisers and their agencies were able to respond to the crisis, despite challenges to the regular TV ad production processes. (MediaPost: 2/25/21)

Over the last three months, video streamers turned up the self-promotion with a 47% more paid spending and increased media value from TV on-air promos. According to iSpot.tv, nearly $910 million paid advertising ($369 million) and media value from TV promos ($541 million) was placed between December 2020 – February 2921. This is up from the previous three month period (Sept. – Nov.), which reached $617 million from paid ($407 million) and promotional value ($211 million). The biggest paid spenders were Disney+ at $73 million; Amazon Prime Video at $59 million; Apple TV+ at $57 million; Netflix at $38 million; Hulu at $20 million; and Discovery at $16 million. When layering on on-air promos, Discovery+ added the most impressions at 37 billion, in a distant second came Disney+ with 6.1 billion, followed by Hulu, 3.0 billion; Peacock, 2.4 billion; Paramount+, 2.3 billion; Amazon Prime Video, 2.2 billion; and AMC+, 1.5 billion (MediaPost: 3/1/21).

The New York Times took a look at the impact the last year had on TV. Nearly a year ago, when the pandemic hit with full force, home viewing became the leisure activity for those in lockdown and working remotely. During that time, cable news scored record ratings, while viewers discovered streaming newcomers as the virus continued. For the first time in a decade, 2020 saw fewer new scripted shows due to the pandemic-related production delays. However, to fill the void left by lack of new scripted shows, nearly all outlets turned to reality programs, documentary series and even game shows, all of which are cheaper to make. Shows like “Celebrity Wheel of Fortune” and “The Price Is Right at Night” were given prime-time hours by broadcast networks. With movie theaters closed or selling limited tickets, streaming platforms gave life to new films on the same day as their theatrical releases. (NewYorkTimes: 2/28/21)

The Pew Research center recently released an American News Pathway Project entitled: How Americans Navigate the News in 2020: A Tumultous Year in Review. The data surveyed over 90,000 adults between November 2019 to December 2020 to understand how they interacted with news and information during the pandemic and election. According to Pew “the most common way they get their political and election news” was from Television at 45% of all US Adults. Broken out by platform, Local TV (16%) and Cable TV (16%) had a slight lead over Network TV (13%), while News websites/apps (25%), Social Media (18%), Radio (8%) and Print (3%) rounded out the responses. (Forbes: 3/1/21)

A NEW SANDWICH FOR MUSTARD LOVERS

Celebrity Chef Tom Colicchio teamed up with French’s mustard to create a signature sandwich for the launch of their MustSwitch campaign. MustSwitch goes head-to-head with mayonaise fans in an effort to give consumers “a new and healthier option to indulge without feeling guilty about their ingredient choices.” According to the US Dept. of Agriculture, yellow mustard has no fat and zero callories while it’s off-white competitor contains 100 calories and 10 grams of fat per tablespoon. The recipe is available on the GMA site, while visitors to Colicchio’s NYC restaurant (this weekend only) can pick up their own sandwich in exchange for a jar of mayo. (Good Morning America: 3/3/21)