As the 2020 US holiday season posted better than expected retail sales growth, the early outlook for the 2021 holiday season is solid despite economic uncertainty. With so many unknowns about when the US economy will bounce back, retailers need to begin planning now for the 2021 holiday season and prepare for several factors that will likely come into play. 2021 US holiday retail sales are forecasted to rise 2.7% to nearly $1.1 trillion, while the season’s ecommerce sales will rise 11.3% to over $206 billion, accounting for a record 18.9% of total holiday season retail sales. Factors to consider include preparing for an economy that’s struggling through the transition, balancing holiday timing with Amazon’s “Prime Day” in October, and “While driving sales is always an obvious temptation on Thanksgiving” guidance is that “retailers would be wise to align around staying closed” this year as well (eMarketer: 2/18/21). 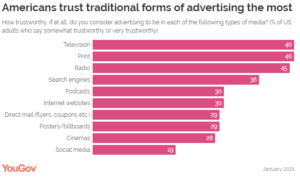 A YouGov study fielded earlier this year for Campaign, showed that US adults find ads on Television to be among the most trusted. TV and Print led for all platforms (tied at 46%), followed closely by radio at 45%. Search (38%) led for digital platforms, before a drop down to 30% for podcasts and internet websites. In total, the study was conducted among 18,000 people in 17 countries.  A report from eMarketer theorizes that TV and other traditional media have a higher level of vetting and more direct purchase (vs. programmatic) which contribute to less of a risk of fraud and misinformation. (eMarketer (sub); 2/22/21)

It started with the VHS and then the DVR. For nearly fifty years, consumers have been looking to control their own viewing schedules. That’s part of the reason why the major networks recently announced that they’re no longer reporting “Live + Same Day Ratings.” However, with majority of the country engulfed in winter storms last week most viewers turned in “live” to local news, watching their local weather coverage with live commercials. And while traditional players and new CTV entrants are touting the power of streaming, the author of this piece calls for integrated strategies that includes a local element vs. putting all their eggs into one basket by chasing a future with on-demand only. (TVNewsCheck: 2/22/21)

Connected TV advertising is estimated to increase to $11 billion, according to this MediaPost commentary, with the traditional TV players benefitting from a large portion of that spend. With nearly “four in five advertising executives” pointing to fraud as a major concern, execs believe that issues would be minimal and/or adjusted if things go wrong with a traditional player. Referencing the Advertiser Perceptions study reported last week, Linear TV was perceived as “most valuable media platform”, further bolstering the fraud argument. (MediaPost: 2/19/21)

The Today Show (2/23) featured an exciting segment on the Perseverance rover, which landed on Mars this week, with five high definition cameras and the capability to record sound (who knew Mars was windy?) While the trip was 131 million miles from earth, it touched down within 16 feet of its intended target. It’s already sent back over 4,000 photos, but if that’s not enough, hobbyists can track precisely where it’s located by using their own telescopes.