Marketers and consumers are anticipating a strong 2021. As we saw during Black Friday of last year, many consumers chose to stay at home and shop online, bringing in-store sales down 52% year-over-year. According to Adobe Analytics, online shopping sales for Black Friday totaled a record of $9 billion, an increase of 21.6%, while Cyber Monday saw an even greater increase in online shopping at $10.8 billion. Once vaccines become widespread, Brick-and-Mortar stores are hoping for in-store traffic to return. One way to maintain brand awareness as the economy opens up and vaccinations become widespread for retailers is advertising. In 2021, 65% of CMO’s are planning on increasing their ad spend, while 24% expect no change and 10% plan on spending less. The National Retail Foundation forecast 2021 retail sales to grow between 6.5% and 8.2%, which would be the highest year-over-year growth in 17 years. Out-of-Home advertising is also expected to rebound in 2021. To keep shoppers safe in stores, retailers have been placing hand sanitizer kiosks, which 99% of shoppers said they feel safer at stores who are providing these stations. (Forbes: 3/5/21)

Due to the tightness in the network TV marketplace, advertiser budgets “don’t carry the same weight they once did if an advertiser is unwilling to allow that money to be moved to the networks’ streaming and digital inventory.” However, networks are putting a premium on their inventory; “disincentivizing some advertisers from making the moves to be more flexible with where their ads appear.” In some cases, streaming CPM’s are 2x to 3x the cost of typical cable prices. Another challenge facing an advertiser’s decision between placing a portion of their linear buys within streaming placements (referred to as “fluidity deals”) is whether they’re getting a unit of comparable value, and where they’re going to run. (Digiday: 3/8/21) 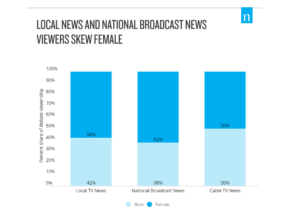 Timed with International Women’s Day, new research released by Nielsen illustrates the gender disparity in representation of women in media and business, which “only grows when you view the gender gap through a multicultural lens. Their goal of helping the media industry power diverse content creation, not only “matters ethically, but also because it matters to the viewers who are ultimately your consumers.” Importantly, female-led households increased 41% in the last 5 years, while women are responsible for nearly $32 trillion in worldwide consumer spending. One way to reach these high value consumers is through local news and broadcast news which tends to skew female than cable tv news. Also of note, local news viewership increased 48% among women during the initial months of the pandemic (Nielsen: 3/8/21).