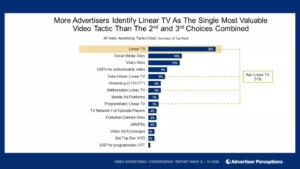 A new survey from Advertiser Perceptions indicates that “advertisers are planning to buy more connected TV and streaming video from established brands in an effort to reach cord-cutters and other over-the top viewers. TV is seen as a safe harbor from fraud (80% site concerns about online and digital video), and the “gold standard in video as platforms evolve”. Not surprisingly, 51% reported that linear TV was “the most valuable video platform”; more than the 2nd and 3rd choices (social media and video sites) combined. (NextTV: 2/16/21)

As the pandemic was getting underway in early 2020, Americans flocked to their TV sets at a rate unseen in the recent past. Uncertainty around the coronavirus drove viewership, as lockdowns kept everyone glued to the news. And while viewership in Q2 still declined, those who continued watching increased their daily time spent with TV by 9.2%, to 4 hours, 31 minutes per day. And for the first time since 2012, 2020 saw a year over year increase in TV time among the whole adult population, jumping from 3:27 in 2019 to 3:34. And while the average time spent with TV is expected to decline in 2021, it will be partially replaced by digital video, which includes connected TV and OTT devices, as well as mobile, gaming, etc. (eMarketer: 2/11/21) 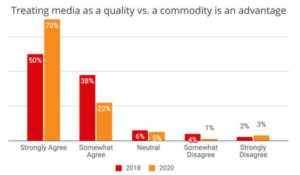 A new study from consultant ID Communications shows that more advertisers and executives now “strongly believe” that those who view media as a “quality” have a competitive advantage over those that view it as a “commodity”. These findings are significant as they run counter to trends in media buying “including the ascendance of procurement and shifts to machine-based programmatic buying”. The study shows there is a broad consensus that media may have as much of a strategic advantage as any other aspect of the marketing mix. (MediaPost: 2/12/21)

While streaming video and CTV captures more headlines, a study from Horowitz research reports that an understated sector, OTA (over-the-air) has seen some equally rapid growth. Horowitz’s “State of OTA 2020 study” saw that US antenna penetration grew 38% year-on-year, and sizes the universe at over 48 million households with an antenna (40% US). The data also shows increase among African American households and white non-hispanic households, as well as young adults 18-34. Another insight is that “OTA viewers frequently combine their antenna usage with MVPDs and/or streaming services,” spending about 1/3 of their 6+ hours/day watching over-the-air content. (RapidTVNews: 2/10/21)