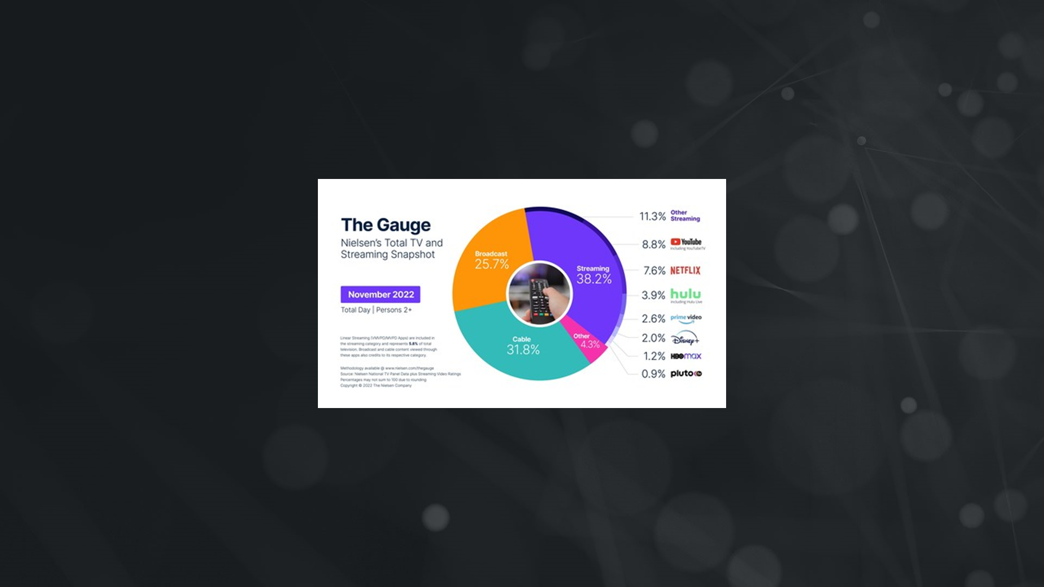 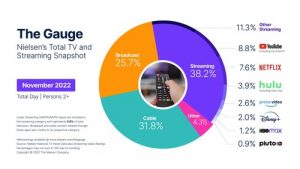 The latest issuance of The Gauge from Nielsen reports that November was the 2nd highest month in TV consumption this year. “Overall TV usage climbed 7.8% from October, and viewing volume was up for all categories across The Gauge on a monthly basis.” Streaming had the highest jump of 10.2% bringing it to 38.2% and grew 41.2% from last November. Netflix, HBO Max, and YouTube all “achieved double-digit viewing increases” last month. Linear TV in MVPD and vMVPD “represented 5.8% of total television usage and 15.2% of streaming usage in November.” Broadcast also rose 6.7% from October, due in part to “NFL programming, World Cup coverage, and four World Series games.” (PR Newswire: 12/15/22)

Integral Ad Sciences Industry Pulse Report found that “more than three-quarters of media experts cited declining consumer trust as their top concern for social media advertising.” And while the vast majority of respondents will continue advertising on social platforms in 2023, two-thirds said that “transparency issues would negatively impact their social media spending.” One bright spot in the industry this coming year is Connected TV, which leads with “higher data ethics scores”, along with traditional broadcast and cable, which have been regulated for decades along with “third-party enforcement”. Additionally, 44% of respondents in the IAS report said CTV and digital video hold the most potential for innovation in the coming year.” (Marketing Dive: 12/19/22)

Hub Entertainment Research’s October report found that “the average household uses 12.5 different sources of entertainment, and that this figure rises to 15.5 among 18–34-year-olds.” The survey measured sources across 10 categories including traditional TV, streaming TV, gaming, streaming music, podcasts, and more. Big brand SVODs had an average of 3.1 subscriptions per household. Of note, nearly half of all entertainment sources used by households are video sources. One item to watch: among households led by 18-34-year-olds, this number dips below 50%. (Marketing Charts: 12/12/22)

New research from TVB suggests that this year’s ad spending during the midterm elections proved to be “the biggest bang for their buck,” especially those that turned to local broadcast TV in the battleground states. At each stage of consideration, voters turned to TV the most and it was their main influence. “In fact, TV’s influence was more than all other media combined, at every stage.” Additionally, 41% of voters selected broadcast TV as motivating to get them to vote; cable TV was 27%, and social media was 24%. “The survey also found that local Broadcast TV news was the most trusted news source while news on local TV station websites and/or apps was the most trusted digital source.” (TV Technology: 12/19/22)

WHAT TO WATCH ON NYE

As the year comes to an end, major networks are hosting New Year’s Eve specials and Variety gathered a line-up of what to watch. Miley Cyrus is back to host “Miley’s New Year’s Eve Party” on NBC with co-host Dolly Parton and other featured guests. NBC will also air “A Toast to 2022” before Cyrus’s special. CBS is hosting “New Year’s Eve Live: Nashville’s Big Bash” which can also be streamed on Paramount+. ABC will air “Dick Clark’s New Year’s Rockin’ Eve with Ryan Seacrest” which is Seacrest’s 18th year hosting the event and will feature performances from many artists. Other NYE celebrations include CNN’s “New Year’s Eve Live,” Meta’s “The Shaq’tacular Spectacular,” Univision’s “Así Sonó El 2022” and “Feliz 2023,” and PBS’s “United in Song 2022: Ringing in the New Year.” (Variety: 12/16/22)