Though Americans remain cautious with the pandemic resurging across the country, the economy saw its fifth straight monthly increase in consumer spending. Consumers increased their spending by 1.4% in September and income rose 0.9% according to the Commerce Department. The September report showed consumer spending on durable goods, like autos shot up 3%, while spending on nondurable goods, like food and clothing rose by 1.5%. “Economist generally foresee annual GDP growth of around 5% in the current fourth quarter.” (Marketplace: 10/30/20) 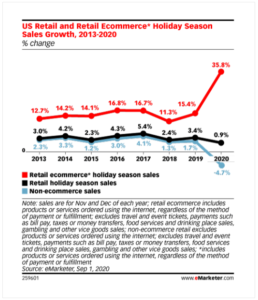 As retailers are bracing for a softer holiday season due to the pandemic, US consumers are anticipated to spend $190 billion through holiday ecommerce purchases. Ecommerce sales will surge 36%, representing an incremental $50 billion in online sales versus 2019. Thanksgiving Day through Cyber Monday also known as The Cyber Five will continue to rise capturing 21% of the total holiday ecommerce pie. Thanksgiving, has been forecasted to see an increase in sales of nearly 50%, reaching $6.2 billion. Black Friday is forecasted to see its first-ever $10 billion spending day, rising 39% year over year. Lastly Cyber Monday is expected to rise 38% to nearly $13 billion, making it the top online spending day of the year. (eMarketer: 10/28/20)

A new study from the IAB and Magid Research, entitled The News Trust Halo: How Advertising in News Benefits Brands found that 84% of consumers feel that “advertising within the news increases or maintains brand trust.” Additionally, these brands are more likely to see increases in consumer perception as well as other positive attributes. And the third key finding is that they’re more likely to consider making a purchase following a brand exposure in their preferred news (IAB; 10/30/20).

Effective January 2021, Nielsen’s network TV and network radio services will restrict ratings data to Nielsen subscriber stations only. First reported by Inside Radio (10/28/20), Nielsen’s dataset summary will no longer include listening data for non-subscribing stations. The concern among critics is that this new policy will leave media buyers with an incomplete picture of the market since the data will no longer reflect all listening. Diary markets have been impacted the most as Nielsen has seen the most non-renewals in this category as companies including Saga Communications, Summit Media, Mid-West Family, Galaxy Communications and others have either stopped subscribing entirely or condensed their use of Nielsen.

For the period ending 10/18, Family Feud grew 4% vs. the prior week, making it the top program in all syndication. Kelly Clarkson, the only talk show increasing this week, surged 13% overall, and 25% in the important 25-54 demographic; despite being preempted by senate judiciary coverage in some markets. Dr. Phil “was immune” from most disruptions and led the talk category with a steady 1.9 HH rating. Live with Kelly and Ryan also ran into preemptions sliding 16% from their season high to a second-place 1.6 rating, while Ellen DeGeneres remained at a 1.1 in its fourth week of the new season. Judge Judy scored “blockbuster numbers”, holding its ground at a 5.4 and finished in front of all daytime programs. Among Prime Access leaders, Jeopardy recovered 9% to a 5.0 while Wheel of Fortune increased 7% to a 4.8. (TVNewsCheck: 10/27/20)

ON THIS DAY: November 4th

On this day in 1916, “the most trusted man in America”, journalist Walter Cronkite was born. As the anchorman for the CBS Evening News for 19 years (1962-81), he was most known for his moving reports on the Vietnam War, the Apollo moon landing, and the assassination of President John F. Kennedy. He ended every broadcast with his infamous catchphrase, “And that’s the way it is.” He also authored several books, including A Reporter’s Life, and Cronkite’s War: His World War II Letters home. (Good News)