According to Standard Media Index the U.S. advertising market cut its declines in the third quarter from the second quarter; down only 5% year-over-year. As the NBA and NHL were postponed to the July-October period it provided for increased ad revenue. Overall, the strongest performing ad category was pharmaceutical drugs, up 19%. Digital media advertising in the U.S. also saw an 8% gain in the third quarter. “TV advertising revenue performance in the U.S. was more or less the same as in other countries, down 8%, while the United Kingdom and Australia were 9% lower and Canada had a 2% decline.” (MediaPost: 10/22/20)

The National Retail Federation (NRF) released the results of an early October survey, indicating that consumers anticipate spending $998 on gifts, holiday food and decorations, and additional “non-gift” purchases this season; down $50 from 2019. The majority of this decline comes from people who are hesitant to purchase non-gift items when they see a big sale. Despite this overall holiday drop, the expected spending is higher than the NRF’s average for gifts and décor. (CNBC; 10/21/20) 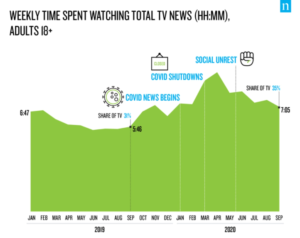 A new Nielsen Local Watch report shows that with all the media available to consumers, news “remains a vital connection to both the world at large and our local communities” with increased viewership among all measured ages and races/ethnicities. As of April, viewers were spending just under nine-and-a-half hours each week watching TV news. Data showed that as we moved into September, American adults were still engaged with TV news, watching average of 7 hours and 5 minutes per week; up 23% from the same period last year (Nielsen: 10/22/20).

In the second quarter, during a focus on both COVID-19 and social unrest, there was a 48% gain in TV news consumption to 8 hours and 34 minutes of news viewing in a week. “Local TV news continues to have the biggest average weekly reach for all demographic groups, at 54% of people 18 years and older.” (MediaPost: 10/23/20)

A recent Dynata study, updated with late-September data, reinforces television’s dominance in reaching large audiences. The findings showed that TV reached 84% of all respondents, while radio reached 58%, social media reached 55%, and ad-supported video streaming platforms reached 27%. Among all news sources, local broadcast TV was proven to be the most trusted (79%) with adults 18+. Among digital media choices, websites and apps of local broadcast TV stations were shown to be the most trusted news sources at 70%. Broadcast TV news ranked #1 among respondents, with 50% agreeing that it provided them with the best information and updates on the COVID-19. Cable TV news came in a distant second at 25% and social media coming in third at 13% (TVB).

With the pandemic keeping more of us at home (and running out of fun and tasty ideas), this easy recipe can help you and your family amp up your cooking game in just 30 minutes or less. Chef Michael Anthony shows us how to make his signature Roasted Squash and Smoked Tomato Chickpea Pizza through a GMA Instagram post. It’s a quick and easy recipe to share with your family and enjoy a delicious new meal together (GMA: 10/22/20).