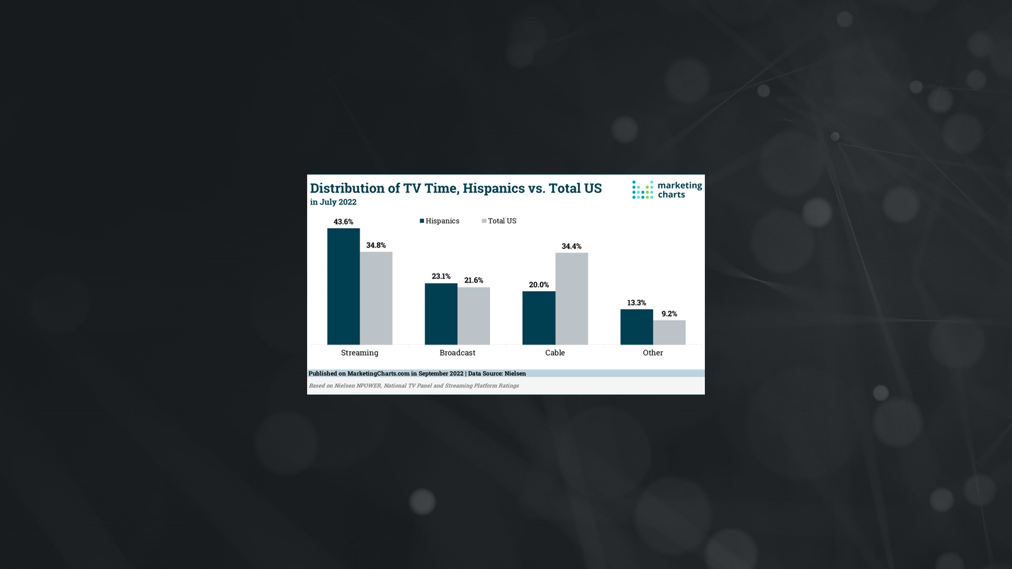 A pre-holiday eCommerce survey from Baird Equity Research “suggests consumers are prioritizing values”, with Amazon remaining the clear leader (60% share), with Walmart and eBay gaining share. Overall, the firm expects that eCommerce will grow 10% year-over-year. However, the survey also suggests that “a larger portion of consumers plan to spend less online for holiday purchases this year compared with last year.” (MediaPost: 10/14/22)

MOST US ADULTS ARE KEEPING VIDEO SUBSCRIPTIONS

A demographically representative sample of Adults 18+ was surveyed by Big Village for their report on the best streaming services. Although 6.2% of US adults have canceled Netflix this year, 68.8% have not canceled any subscriptions. The second most canceled subscription is to Paramount+ (6.1%), followed by Hulu (5.8%), HBO Max (5.4%), Disney+ (4.7%), and Amazon Prime (4.4%). Since Netflix “lost subscribers in Q1 and Q2 2022, all eyes will be on its Q3 stats” and the platform hopes that its new ad-supported tier will win back its “cost-conscious subscribers.” (eMarketer: 10/17/22) New research from Nielsen illustrates the extent to which Latinos are consuming streaming video. “Streaming accounted for 43.6% share of Latinos’ TV viewing time in July, more than broadcast (23.1%) and cable (20.0%) combined.” The study also looked at differences among Hispanic populations, with Spanish-dominant viewers spending more than a third of their TV time with broadcast (34.9%); while English- dominant viewers spent only 14.5% with broadcast. Popular streaming services, including Netflix and YouTube “accounted for about 1 in 8 TV minutes during July” and “per the report, Latinos spent 24% more time with Netflix and 57% more time with YouTube than non-Hispanic Whites.” While the report notes that there’s more work to be done, inclusivity may be one reason Hispanics are pleased with their streaming experience. (MarketingCharts: 10/10/22)

According to a report by MadScience for Comcast, “viewers are more likely to remember ads they saw on TV than those on mobile.” Looking into what types of ads gain the most traction, 188 participants were surveyed and most felt that viewing ads on TV is 40% more memorable. “Fewer potential distractions than the digital mobile experience” may be one reason that consumers found ads more compelling on TV. The study touched on emotional impact, with consumers reporting a greater response “when they saw the ad first on TV before digital, versus if they saw that ad twice on mobile.”(Fierce Video: 10/12/22)

Republicans are “paying far more for TV ads than Democrats on the exact same programs. The reasons are tied to Republicans’ reliance on super PACs.” On Oct. 2, the Las Vegas Raiders game played multiple political ads, including two from Democratic Catherine Cortez Masto and a Republican super PAC which paid very different costs for the 30-second time slots; Cortez Masto paid $21,000 and the super PAC paid $150,000. The difference may “become hugely consequential in midterm elections that will determine which party controls Congress.” (NYT requires a subscription: 10/13/22)

As Halloween approaches, declining subscriptions, slow revenue growth, market saturation, and an impending recession may look spookier. However, streaming services are using Halloween to gain subscribers as their 5th annual Huluweek “might be the biggest dedicated thing that we do in the year.” The event features horror classics and lets the viewer choose “scary,” “very scary,” or “very very scary.” Last year, “the content hub was visited by 75% of the platform’s active users, who consumed 7.2 billion minutes of content.” Similarly, “Halloween Ends” premieres on Peacock this week, alongside the theatrical release, while the network has created a “gamified movie-picker” called Peacock Halloween Nightmare.  (Ad Age requires a subscription: 10/14/22)