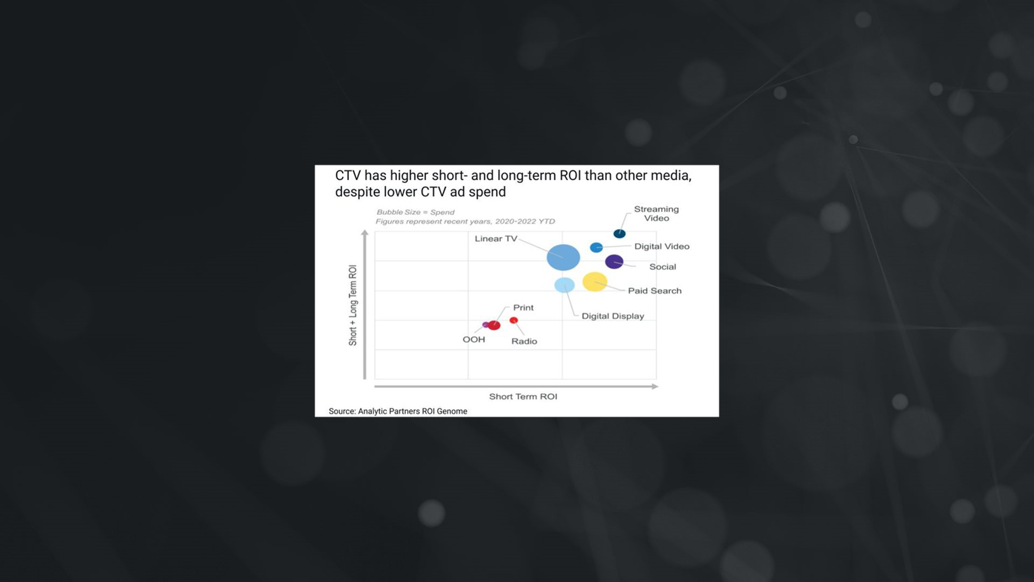 According to Kantar’s VP Growth & Strategy, with over $4.5 billion committed to this year’s midterms, “ad spending for the 2022 Midterm election, especially on the local level is, ‘is one for the record books.’” It’s predicted that overall, political spending could reach $9 billion across all media. This year there are 35 Senate seats are up for election and “six of these races are already spending over $100 million.” with races in North Carolina and New Hampshire expected to join “that lofty level of spending.” (Media Village: 10/5/22) 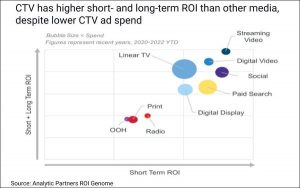 According to Analytics Partners, CTV “continues to be ‘massively underutilized’ in relation to its return on investment.” The report states that “CTV is yielding ROI 30% higher than that for other marketing channels – even though CTV is averaging just 7% of total spend.” AP does acknowledge that there can be difficulties when measuring, which explains why it isn’t always a high proportion of media mixes. One reason may be that metrics don’t always take long-term buying into consideration “which is why CTV’s benefits are so underrated.” The impact that video ads have on consumers outweighs non-video media and overall, “AP recommends that CTV and streaming video should be at least 10% of a brand’s total advertising spend, and preferably close to 20%.” (MediaPost: 10/7/22)

In a recent Blue Label Labs survey of 1,005 people, nearly two-thirds of them have canceled at least one streaming service in the last year. “The most canceled streaming service reported in the last year is Amazon Prime at 9.46%, followed by Netflix at 8.55% and Disney+ at 8.33%.” Most people canceled because they weren’t watching it enough, while the second most common reason was that the price has become too expensive. For a lower price point, 51.98% will deal with ads, whereas 18.81% will pay to have no ads and 19.40% will delete apps with ads. Rather than using a paid streaming service, consumers report spending more time on social media like YouTube’s free version, Instagram, and TikTok. (MartechSeries: 10/5/22)

This year, consumers are reporting that they’ll be shopping for fewer people but they will still spend an average of 6% higher than in 2021 due to inflation, according to KPMG’s Consumer Pulse Survey: Holiday 2022 report. “The top three concerns for holiday shoppers this season are inflation (85%), stockouts (63%), and shipping delays (57%).” About half of respondents will begin shopping earlier this year to get ahead of stockouts and delays; “52% starting in October or earlier.” Also to prepare for high spending, 60% of shoppers plan to shop on Black Friday and 50% on Cyber Monday. (CSA: 10/5/22)

Late-night talk shows are facing major changes next year: Trevor Noah is leaving The Daily Show, James Corden is leaving CBS’s The Late Late Show, TBS canceling Full Frontal With Samantha Bee, and the possibility of NBC moving The Tonight Show to 10:30 PM. Late-night shows have been popular for a long time, reeling in large profits with relatively low costs “but as streaming has ascended, and network TV audiences and advertising revenue has dwindled, worries that late-night shows could be the latest genre affected by sweeping change” in the entertainment industry are growing. “Revenue has fallen for the late-night shows” which can be seen from last year’s $301 million in advertising revenue falling 16% to $253.6 million in the first half of 2022. However, there is hope that the late-night genre will persevere as they “take on new forms.” (NY Times– requires a subscription: 10/10/22)