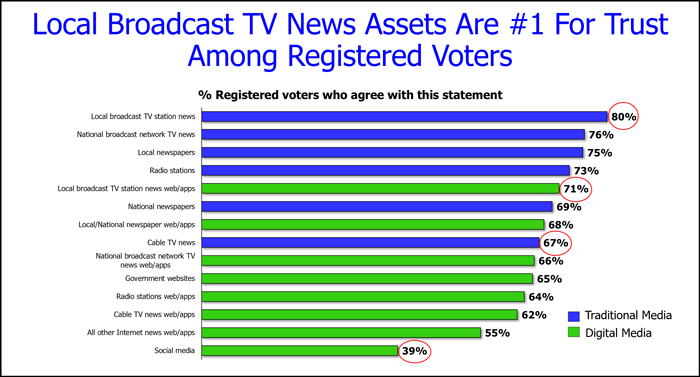 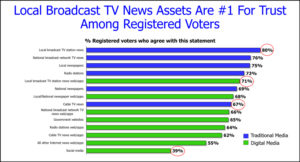 TVB commissioned Dynata to update its national coronavirus media usage study in September. This section surveyed nearly 4,500 registered voters, finding that Television is ranked number one for reach, with 86% “reached yesterday”. Radio (60%) and Social media (55%) were ranked two and three, respectively. Consistent with the previous report, Local Broadcast TV was found to be the most trusted news source with registered voters (80%) and highest-ranked for information and updates on COVID-19 (61%). The study shows only 41% of registered voters plan to vote in person during this election, 34% plan to vote by mail, 16% early in-person, and 8% plan to drop off a ballot at a box or location on November 3rd (TVB).

A Variety-hosted panel on streaming discussed recent viewership insights including an increase in multigenerational viewing (where families co-view content) and the access to more supplemental content like behind-the-scenes clips and interviews. As one panelist describes it, “TV has become this lifeline in many different ways”. And while there’s escapism, storytelling, the familiar, and comfort programming, there’s also access to news; whether it’s pandemic-related, or election coverage. One emerging trend is the “consumption of more daytime television, such as game shows and home or food-centered reality TV” (Variety; 10/2/20).

In a brief audio report and companion article, Marketplace (10/12) explains how COVID-19 has pushed the holiday shopping season even earlier this year … and “holiday creep” is already here. Product shortages and supply chain issues caused by the pandemic have taught shoppers (more of whom are shopping online) to “that if they see something they like, they should buy it now and not wait.” And while spending won’t be as high as recent years (due in part to “high unemployment and considerable economic uncertainty”), if we do spend, it will be for home items we can use at home.

This season marks Kelly Ripa’s 20th anniversary as co-host of the show now known as Live with Kelly and Ryan. The Emmy-nominated actor, who has shared the set with Regis Philbin, Michael Strahan, and now Ryan Seacrest, is one of daytime TV’s most enduring stars. And earlier this year, with her at-home tapings, she never missed one show throughout the pandemic. And while Ripa, and the show, don’t ignore what’s going on, they’re a non-political complement to The View, registering nearly 2.7 million viewers for their season premiere (Variety; 10/8).