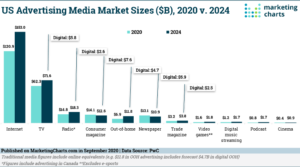 This year, PwC forecasts that online advertising spending will dip slightly to $120.9 billion; roughly double the spending in TV ($62.3 billion). While the current drop in spending is attributed to COVID-19, PwC projects recoveries for non-print platforms, driven in part by digital (Marketing Charts: 9/28/20).

“Pro-Biden PACs lately also have been outspending pro-Trump PACs when it comes to advance bookings of TV ads from Oct. 6 leading up to Election Day.” Democrat/pro-Biden PACs have $112.9 million TV/radio ads cued up vs. $36.4 million by Republican/pro-Trump PACs to run over that period (AdAge: 10/2/20).

As we head into the final stretch of the election, political advertisers are relying more on Connected TV. In the second quarter, Nielsen reported time spent with streaming video grew to 25% of total TV minutes, an increase from 19% in fourth quarter 2019. For consumers who drop their cable/satellite subscription, CTV viewers become an attractive target for political advertising. A study by Magnite found that 40% of “persuadable voters” are not cable or satellite subscribers, while 70% of them have an ad-supported streaming TV service. (Forbes 10/5/20).

According to DoubleVerify Inc., fraud in internet-connected TV is on the rise. A separate analysis by ad tech firm MadHive Inc. found 20% of connected-TV inventory to be suspicious at the end of 2019. It’s harder to track and stop ad fraud in streaming TV than in other kinds of digital media. “Emerging technologies often require new solutions, and CTV is no different.” Companies are working with partners on the publisher and the tracking side to get ahead of it, while many advertisers are increasing direct deals with device owners and app publishers, which offers more control, security and visibility over were there ads run (WSJ: 9/27/20).

Long-running game show The Price is Right is heading back into production with a redesigned, COVID-friendly set. For the first time in its 50-year run, TPIR will air without an audience. However, fans will be happy to know that all their favorite games will be back with social distancing guidelines in place. With a newly designed set, production has created something that is more modern and fits in the times without taking away from the shows nostalgia (Deadline: 10/5/20).