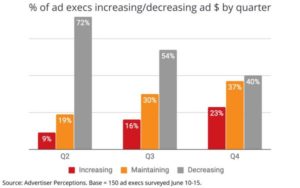 Average media plan lead-time has been cut by 45% since the pandemic began, according to a survey of US ad execs by Advertiser Perceptions (Mediapost, 7/14.) The study’s sixth wave (7/10-15), found that the pre-pandemic time for media plans was 4.2 months vs. 2.3 months post-pandemic. While flexibility topped the list among respondents when negotiating, more advertisers report increasing or maintaining 4th quarter budgets (60%) vs. decreasing budgets (40%).

Ad Age’s Data Center (Adage.com; 7/9) is reporting exclusive research from iSpot.tv, indicating increased TV advertising as the economy continues to reopen; albeit in fits and start. Commercial impressions were up for the measured week (6/29) vs. the week prior (6/22), with 43 of the top 50 brands showing increases and 36 growing by at least 25%. Of note, the increased impressions don’t necessarily correlate to increased spending as advertisers may be electing to advertise in more efficient programming and dayparts.

Following industry outcry, Nielsen will reinstate its plans to integrate out-of-home viewing into national TV measurement (rbr.com; 7/13.) Nielsen had previously alerted the advertising community to a delay based on perceived changes in consumer behavior. However, they’re back on track to include out-of-home TV viewing in September 2020 as originally planned.

Research company TVSquared partnered with Comcast to demonstrate TV’s positive impact on online consumer engagement (NextTV; 7/13). Fielded from January through May 2020, the article reports on response over time for the online food delivery as a category as well as detailed by daypart. Changing creative to a COVID-19 message was seen to have a big impact as was consistency. Between March and April, brands that ran COVID-19 messages on TV saw an average lift of 37%, compared to the 13% lift for advertisers that didn’t.

A MoffettNathanson analysis of Nielsen data (Mediapost 7/14), March 30 – June 7, showed that US streaming minutes increased by 85% (1.48B; up from 799M the same period last year.) While the rise was weighted towards the initial lockdowns at the end of March/early April (+131%), the first week of June still saw a 50% increase year-over-year. All major platforms all saw gains, with Netflix holding the highest share at 33% (down from 35% last year) followed by YouTube and Hulu. However, vMVPDs like YouTube face significant challenges. In a separate report (FierceVideo.com; 7/14), MoffetNathanson said that “continued price hikes at vMVPDs will accelerate consumer shifts toward alternative OTT offerings, meaning fewer cord-cutters will be converted to vMVPD subscribers.”

Facebook is considering banning all political ads prior to the upcoming election, according to Bloomberg (7/10) and other outlets; referencing “people familiar with the company’s thinking.” While the halt on ads “could defend against misleading election-related content as people prepare to vote”, there’s concern that the blackout may hurt “get out the vote” campaigns or limit a candidate’s ability to widely respond to breaking news.

The Tonight Show Starring Jimmy Fallon returned to Rockefeller Center Studio 6A on Monday, 7/13. Jimmy’s monologue balanced heartfelt wishes to states in crisis with topical humor and an ironic song and dance number featuring a virtual Tracy Morgan. While there was no audience The Roots, also in studio, laughed in their place. Guests were on Zoom (NY Gov. Andrew Cuomo, Charlize Theron, and Little Big Town), and Jimmy replaced his suit with a sweater, and the episode included recorded bits like “Couldntyajust?!” and “I Like Your Style.”