The co-founder and CEO of MediaRadar hosted a webinar that focused on America’s return to normalcy. According to an article in InsideRadio (6/12), he reminded attendees that “when we think about this V-shaped recovery and this hope that everything’s fine, the average is misleading.” He explained that “The truth is [that] some markets are more resilient than others.” But there are surprises. For example, local domestic tourism, where bureaus around the country are actively spending. On the other end, with salons reopening hair care and shaving supply spending has returned to pre-pandemic ad spending levels, as have spending on eyewear and home-office supplies.

Variety (6/13) reports on the request from the ANA to the TV networks for a shift in the upfront market to a “calendar upfront” due to uncertainty in the marketplace. While the switch to a calendar upfront may be the ANA’s official preference, the article reports that at least two major advertisers (and ANA members) are already conducting their own discussions about buying inventory soon. 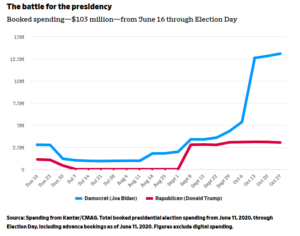 Adage (6/16), in conjunction with Kantar, estimates that Republicans and Democrats have spent a combined total of $1.3 billion on presidential campaign advertising. The total represents television, radio and digital (Facebook and Google properties, only) from 1/1/19 through election day (booked). Nearly 90% of that estimate is attributed to the various Democrat candidates that ran as well as pro-Democrat PACs. Nearly 61% of the $1.3 billion was spent by Bloomberg and Steyer’s self-financed campaigns. To date (6/11), Biden has booked $76 million, to Trump’s $26 million, a figure that can change at any time.

Adweek (6/11) sites a report that cable subscriptions will decrease by 27 million households over the next five years. MoffetNathanson, authors of the study indicate that Covid-19 has made cord cutting more pronounced and accelerating the shift to streaming services.

Adage (Subscription; 6/16) interviewed Verizon’s CMO, Diego Scotti. The discussion included marketing in a pandemic, insights on diversity, and navigating the 5G landscape. Scotti believes that Verizon’s path forward means that the brand must “double down on being a premium network”, with messaging based on real people, “real employees, and real stories.” As one of the first brands to have a new spot during the initial phase of the pandemic, Verizon told consumers that “our network was going to be there for them.” A recipient of Ad Age’s D&I award, reinforces the need to hire diverse talent and the steps they take. He also described the decision to put their Pride campaign on hold in support of the Black Lives Matter movement.

Deadline (6/16) reports that CBS’ The Bold and the Beautiful is the first U.S. broadcast series (and possibly the first scripted series on American soil) to return to a stage production. The production hired a COVID-19 coordinator and will follow safety guidelines including the wearing of masks for when actors aren’t filming. The drama will resume its season on Wednesday, June 17th, at Television City in LA. While an airdate has not yet been set, the hope is for the return of original episodes in mid-July.