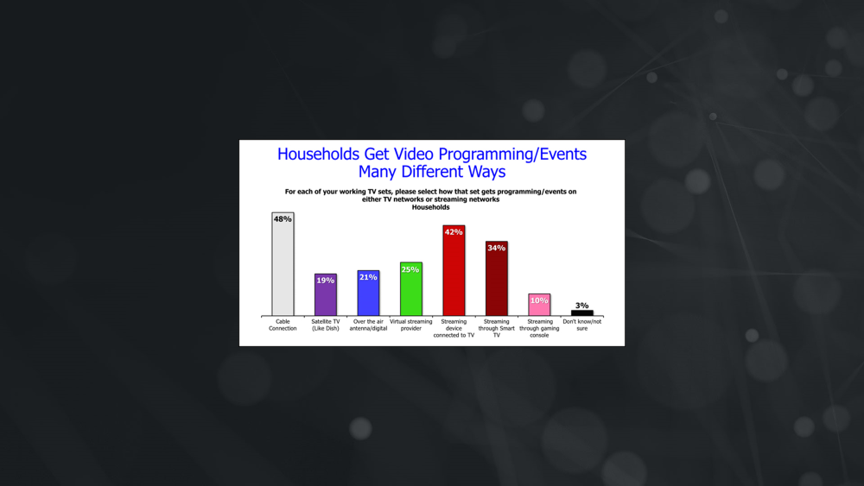 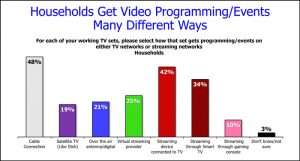 The 2022 Media Devices and Usage Study, conducted by GfK for TVB “attempts to better understand the way people use media devices for video content with the hope that its findings will help inform and improve the measurement of TV/Video audiences.” As TVs and other devices continue to evolve, so do the habits of viewers. For example, 28% of respondents use earphones/earbuds/hearing aids or closed captioning. The number rises to 44% for A18-34 and 50% for Hispanics. (TVB: August 2022)

LOCAL TV NEWS ON THE RISE

While the final episode of The Ellen DeGeneres Show aired in May, many stations that aired the program, now in repeats, will be replacing her syndicated show with a new newscast. In San Jose, KNTV will air the east coast feed of NBC’s nightly news followed by a 4:30 Bay Area newscast. In Los Angeles, Minneapolis, Providence, and Las Vegas, it’s a similar story with the addition of local news, rather than another talk show. One station GM credits the “enhanced relationship between consumers and vital local news” and working from home since the pandemic, for this shift in strategy. (NextTV: 9/2/22)

In the wake of Nielsen’s data measurement challenges, trade associations VAB and the ANA reported that they’re building their own panels for cross-platform measurement. Unlike Nielsen’s “audience panels,” these newer entries are “calibration panels.” Used in conjunction with large first-party data sets, calibration panels “help validate census-level information using device-level data from set-top boxes and smart TVs to verify impressions and deduplicate audiences.” In turn, they can help control frequency. The VAB and ANA are taking slightly different approaches, with more of a focus on TV (VAB) vs. cross-platform measurement. And while they’re both intended to “help mitigate bias,” they’re not perfect and have biases of their own.  (Ad Exchanger: 8/24/22)

The back-to-school season is upon us, with retailers returning to “pre-pandemic marketing playbooks.” Now that the majority of US students are returning to in-person schooling for the first time in three years, the National Retail Federation forecasts that “spending on school clothes and supplies is on track to reach $37 billion this year.” However, surveys have shown that more parents are focusing more on buying essentials as inflation prices increase. Retailers hear this loud and clear and “they will need to focus on items that aid students and families in the return to in-person learning.” To do this, retailers are offering promotions that include bundles, free shipping, and limited-time-deals through more than pandemic advertising strategies all so that “retailers have the ability to really capitalize on this change while also trying to make it a stress-free experience for families.” (Street Fight: 8/25/22)

New York Times TV critics, James Poniewozik and Margaret Lyons reflect on “fall TV season,” that time of year, at the end of summer when “the big networks would roll out splashy prime-time TV preview specials that had the fresh, promising smell of new school supplies.” Now that “premiere season is all year round,” thanks to streaming, it’s “less about what you’re going to watch immediately, and more about adding to your to-do list of shows to watch eventually.” The pair also discuss the series that they’re most looking forward to this season, including long-running favorites, new seasons of some current hits, and a trio of classic fantasy reboots. (The New York Times: 9/6/22, requires subscription.)