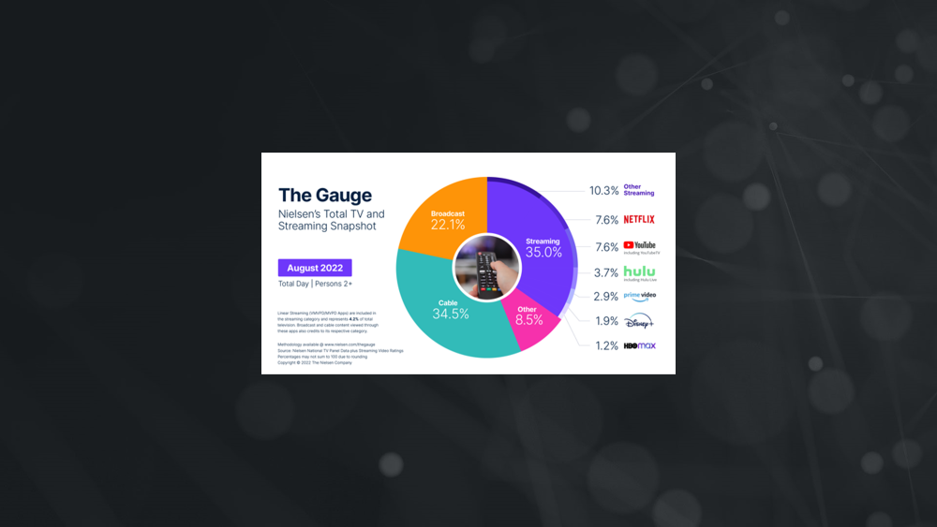 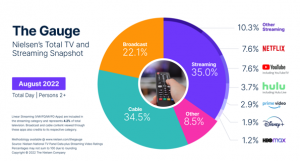 According to Nielsen, streaming claims “35% of total TV usage in August 2022, while audience engagement across platforms is starting to vary.” Streaming continues to increase as it is up 22.6% from last August. Interestingly, “when it comes to streamers, audiences follow the content.” Popular shows like Stranger Things and House of The Dragon were the cause of increases in usage. Although it’s typical for overall TV to decrease in August, broadcasts saw an increase “driven by a +3% rise in sports content consumption, including the NFL preseason, college football, and the MLB Field of Dreams game.” (Adweek: 9/15/22)

A PAIR OF HOLIDAY REPORTS … PT 1

In their latest Holiday Report, research company HarrisX, predicts that consumer shopping habits are looking more like they did in the past. “With Americans continuing to embrace a ‘return to normalcy,’ retailers will see trends like a return to in-person shopping emerge feuling the holiday season.” More adults plan to spend the same amount of money or more than last year at an average of $1,041 per person. As the return to normalcy strengthens, “31% of U.S adults plan to do most or all of their shopping in-store” with in-store shoppers planning to spend more than online shoppers as they’re “expecting to spend $1,286 this holiday season and the average majority online shopper planning to spend $853.” (Globe News Wire: 9/14/22)

A PAIR OF HOLIDAY REPORTS … PT 2

In an unrelated report, according to findings announced by Roku in partnership with the Harris Poll, support that holiday season spending is likely to be strong. Amid inflation, “shoppers plan to spend an average of $993 on holiday gifts, a 6% increase from 2021.” Holiday shoppers are streaming more TV at an “average of 10.7 hours per week” which is helpful for advertisers that are beginning to put more focus on streaming platform ad space. “Holiday shoppers are more likely this year to have looked up a brand or product reviews on a search engine after seeing a brand or product advertised on a streaming service or device.” (BusinessWire: 9/15/22)

The latest video usage report from Hub Entertainment Research has outlined the most popular TV viewing sources which include linear TV and the different streaming services. Live traditional TV delivered by a linear pay TV service “still ranks No. 1 with 28% of the 1,600 U.S. adult TV watchers … Netflix ranks second at 23%, but it has largely stagnated in that position.” Hulu obtained the 4th ranking on top of Amazon Prime Video, Disney Plus, and HBO Max. When asked what their default source of TV is, “50% of adults 55-plus list live linear TV” while 38% of 18-34-year-olds listed Netflix. (NextTV: 9/19/22)

The Hollywood Reporter runs down this week’s list of Network TV and streaming premieres, returns, and specials. Included are new seasons of Emmy winner Abbott Elementary, long-running Law & Order: SVU, and the launches of high-profile shows across Hulu, Peacock, Paramount+, Disney+, and more. According to THR, it’s a different story on cable this week, as they’re “pretty much taking the next seven days off in terms of premieres.” (The Hollywood Reporter: 9/21/22)