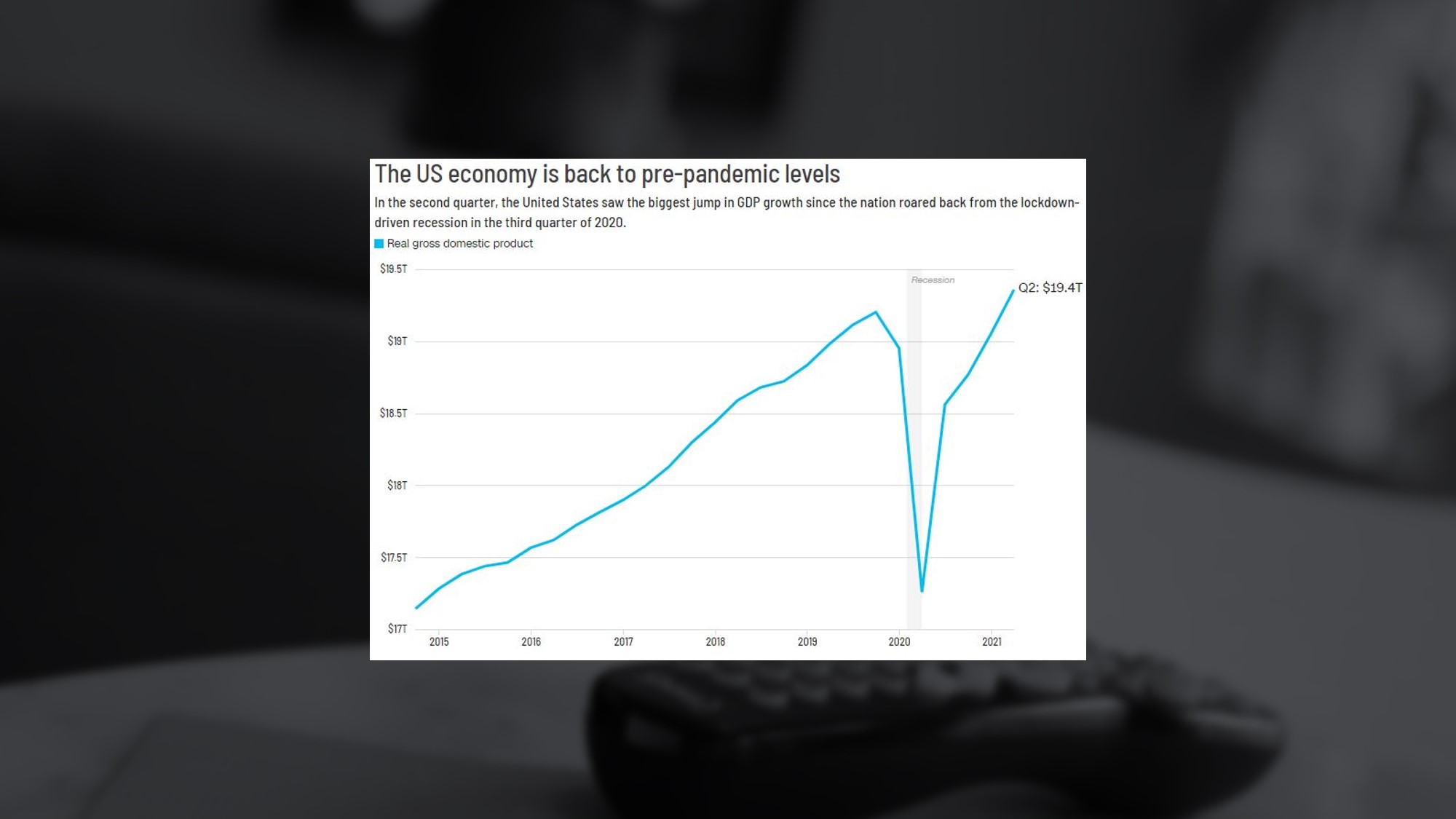 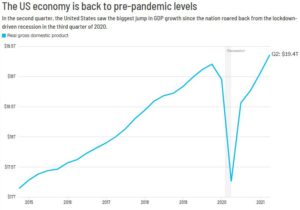 In the second quarter the U.S. economy expanded at a slower rate than expected, but at its fastest pace since last fall, growing at an annual rate of 6.5%. The economy has now recovered in that it has grown more than its pre-pandemic size. The acceleration of the recovery can be attributed to increased consumer spending on services, particularly dining and travel. The price index that tracks personal consumption expenditures rose to 6.4% in the second quarter, its highest level since 1982, while food and energy price index stood at 6.1%, the highest reading since 1983. Looking forward to third quarter, economists are forecasting lower annualized growth due to the spread of the Delta variant,  “waning fiscal stimulus”, price increases, and other factors . (CNN: 7/29/21)

Digiday’s future of TV briefing recaps five key trends from this year’s upfront and looks forward to the coming year. While declines in national  linear TV have “caught up to the upfront market”, the lessening of available inventory has reinforced the networks’ bargaining power. As an alternative, buyers looked to streamers like Amazon, Roku and YouTube to supplement their plans. Turning to scatter, the market will likely see premiums over upfront, with some executives concerned that there won’t even be enough linear inventory for a calendar upfront. With last year’s viewership “thrown out of wack by the pandemic”, advertisers will need to accumulate data over the course of the current year, to gain better insight into where they spend their money. (DIGIDAY, Subscription Required: 7/28/21)

iSpot looked at linear and cable advertising across 192 DTC brands, and more than 300 OTT publishers and CTV platforms. Peloton ($68.9 million), Uber Eats ($53.4 million), and Carvana ($43.6 million), spent the most  during the first half of 2021. Peloton took the number one spot with 11.5 billion impressions, while Chewy and Carvana took second and third, each garnering over 10 million views. Looking ahead, iSpot reports, “…the more TV resembles digital, the more you’ll see these brands integrate television into their models. he process is just getting started, so we’d expect their presence to grow even more in the coming years. (MarketingBrew: 7/28/21)

More Americans are “stacking” subscription video-on-demand services (SVOD). A survey of 4,000 internet users from Ampere Analysis showed that 84% of internet users have access to at least one content streaming service, while 52% have access to three or more, up from 48% last year. The report also looks at drivers of stacking. Original content inspires the stacking of services with 49% saying original content is the reason they subscribe to a platform, and 48% say that TV viewing is a major part of daily life and contributes to how Americans interact with one another. Additionally, TV viewing inspires conversation, with 56% of respondents saying that the content gives them something to talk about with others (MarketingCharts: 7/29/21)

New research indicates that offering viewers a tiered structure of both ad-free and with ad options may have the broadest appeal. Of the 1,607 people (ages 16-74) surveyed by Hub Entertainment Research, free-with-ads and SVOD options were neck-and-neck, at 66% and 64%, respectively. The study also looked at preference differences between “limited ads” and a “tiered” option (i.e. both ad and ad-free), with nearly twice as many choosing the tiered version. While tiered offerings may cannibalize off of paid subscriptions, the survey indicates that they also deliver on attracting new users/subscribers. (MediaPost: 7/30/21)

In one of the most exciting high jump competitions in Olympic history, Qatar’s Mutaz Essa Barshim and Italy’s Gianmarco Tamberi, who both cleared 2.37m, decided to forgo a jump-off and share the Olympic gold. Gianmarco Tamberi was stunned when a rules official allowed Barshim’s request to share the gold medal and passionately embraced his rival. (NBCOlympics.com: 8/1/21)