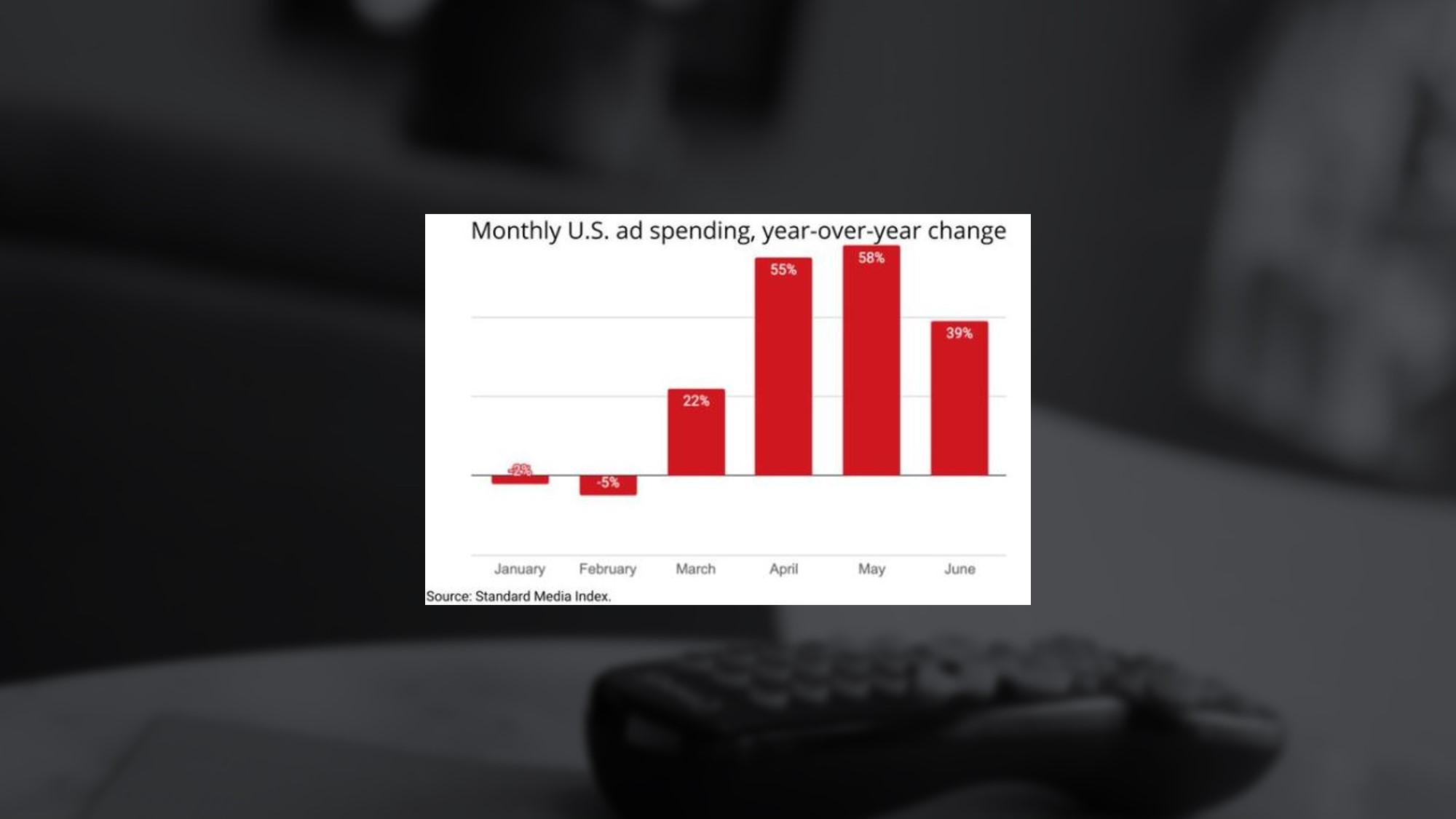 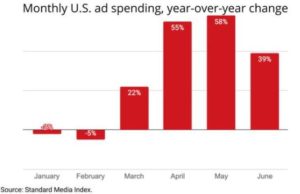 According to the latest data from Standard Media Index, the U.S. ad economy continues to rebound from the COVID-19 recession, however rate of expansion began to temper in June. Total U.S. ad spending, representing the major agency companies media buys rose 39% in June vs. the same month in 2020. The data indicates that the U.S. advertising recovery isn’t even across all media, with the major electronic media showing the greatest gains; namely digital. Out-of-home and radio have demonstrated particularly strong growth in the last few months, and while magazines continue to lag, newspaper ad spending showed its first month of growth in June, rising 60% over June 2020. (MediaPost: 7/19/21)

According to iSpot, TV ad spending rose 9% in the first half of 2021, despite a 6.1% decline in impressions. As people stayed home during the pandemic, total TV impressions fell to 3.77 trillion; at the same time total national TV ad spending rose to $21.4 billion. TV spending by automotive marketers was up 41%, quick-serve restaurants were up 25% and beer brands were up 57%. With successful vaccine rollouts in early 2021, optimism among both consumers and TV advertisers grew. Brands embraced “business-as-usual” messaging and leave masks behind in their creative, as well. And while “addressable ads continued to grow … increasing by 14.6% compared to the same period last year, it remains a small part of TV advertising overall, representing just 1.6% of total on TV.” (NextTV: 7/16/21)

BACK TO SCHOOL AND COLLEGE 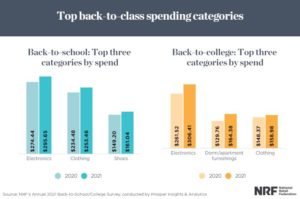 As families and students plan to return to in-person classrooms this fall, consumers plan to spend record amounts for both school and college supplies, according to the NRF. Families with children in elementary school plan to spend an $849, on average, up $59 over last year. Total back-to-school spending is expected to reach a record $37.1 billion, up from $33.9 billion last year. College students and their families plan to spend an average of $1,200, an increase of $141 vs. last year. Total back-to-college spending is expected to reach a record $71 billion, up from $67.7 billion in 2020. Just over half (51%) of K-12 and college shoppers have begun shopping for the items they will need when classes resume later this year as of early July. 39% say they took advantage of recent sale events such as Prime Day, Target Deal Days and Walmart’s Deals for Days to shop specifically for school items. (NRF: 7/19/21)

According to Horowitz Research’s recent State of Viewing and Streaming 2021 report, ad-supported streaming options continue to gain momentum. “Almost half (46%) of TV content viewers in the U.S. report using an ad-supported streaming service (AVOD) at least monthly, and a full 28% use a free ad-supported TV (FAST) service with ad supported linear channels in addition to their on-demand offerings.” Consumers are using a wide range of ad-supported services with linear content: Pluto TV, Tubi, The Roku Channel app, and IMDb TV are among the services consumers report using most often. The growth of these FAST services signals an important turning point for media companies struggling to adjust their business models to the streaming environment. Among consumers overall, the pie is split rather evenly: 35% of self-reported time spent is now spent on linear content delivered via cable, satellite, or over-the-air through an antenna, while 37% is spent on streamed content, and the remainder is spent on cable or satellite-delivered VOD, content that is DVR’d, or DVDs. Among younger consumers, the picture is more dramatic with 50% of 18-34 year old time spent watching streamed content and only 18% of their time is spent with traditional, linear content. (Horowitz: 7/15/21)

NBC NEWS AT THE OLYMPICS

Earlier this week, NBC News announced their coverage plans from Tokyo. Savannah Guthrie will kick off coverage for The Today Show, and will co-host the opening ceremony (Friday, July 23) alongside Mike Tirico. On the following Monday, July 26, Hoda Kotb, Al Roker and Craig Melvin will join Guthrie to anchor Today live from NBC’s outdoor Olympics set overlooking Tokyo’s Rainbow Bridge. Covering his 10th Olympics for NBC News, Lester Holt will anchor NBC Nightly News from Japan, starting Thursday and through the opening weekend. For more details and a roster of reporters, check out TV Newser (Adweek; 7/19/21).