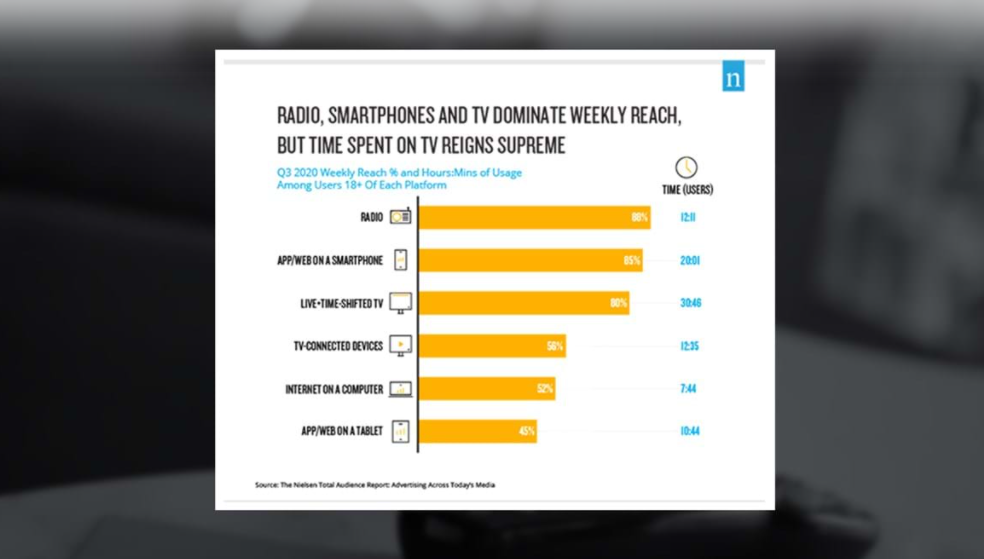 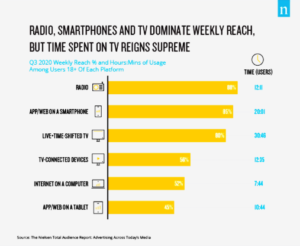 The just-released Nielsen Total Audience Report looks at where consumers spend their time and money. In fact, over half of them (55%) are optimistic or very optimistic that “they could get back to their normal routine in 2021. With consumer optimism on the rise and people still spending more time at home, TV consumption remains healthy (most time spent at over 43 hours/week when combining live, time-shifted, and connected devices). In first of two reports measuring trust, this study found TV and radio to be most trustworthy for the claims made in advertisements on their platforms. (Nielsen: 3/25/21).

Insights from the same study were shared by Mediapost, reporting that that smartphone usage declined nearly 61% among adults 18-34, while laptop and desktop usage increased. While these findings may defy conventional wisdom, Nielsen caveated that they “enhanced” how they measure Android usage starting in May 2020; to better reflect “intended behavior” vs. “background” use.  Another development from the study; CTV daily usage is edged above live/time-shifted viewing — one hour/22 minutes versus one hour/12 minutes. However, TV is not lost with the older demo; those 65 years and older increased live/time shifted TV usage, the only group to do so. (MediaPost; 3/25/21, 3/30/21) 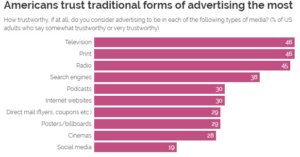 In the second report on trust this week, an online survey fielded by YouGov earlier this year showed that TV, print, and radio command the most trust of the ten media vehicles studied. Print and television were tied for first place at 46%, while Radio placed third with 45%. Podcasts came in fifth place at 30%, while social media ranked last at 19%. “Despite numerous options available to consumers today to gain information and trust the means of that information, traditional media still ranks high.” (InsideRadio: 3/26/21)

Data from iSpot.tv shows that true crime and police procedural series are a huge driver of TV ad impressions, for both new episodes and syndicated airings. Law & Order: SVU has racked up over 15.4 billion TV ad impressions becoming the No. 1 non-sports program on TV. Blue Bloods and Chicago PD aren’t far behind with 12.5 billion and 11.7 billion impressions so far this year, making them among the top 25 shows by minutes watched according to data from VIZIO’s Inscape. However, when adjusting to account for “ad impressions delivered during new episodes” only, daytime favorites like Let’s Make a Deal, The Price is Right, and The Young and the Restless “rack up massive impressions. (TVREV: 3/25/21)

THE PERFECT “TREATS” FOR EASTER

Peeps fans feast your eyes on a new way to enjoy your favorite pastel-colored Easter treat. Rice Krispies treats made with colorful sugar-coated chicks in lieu of standard marshmallows to make one epic festive confection. Check out the recipe at (GMA; 3/26/21). And if you prefer your Peeps in a can, look no further than Pepsi x Peeps, a limited-edition marshmallow flavored cola featuring that will come in yellow, pink, and blue mini cans. However, Pepsi x Peeps, will not be available in stores; instead only for a limited time through a sweepstakes. (GMA: 3/25/21)