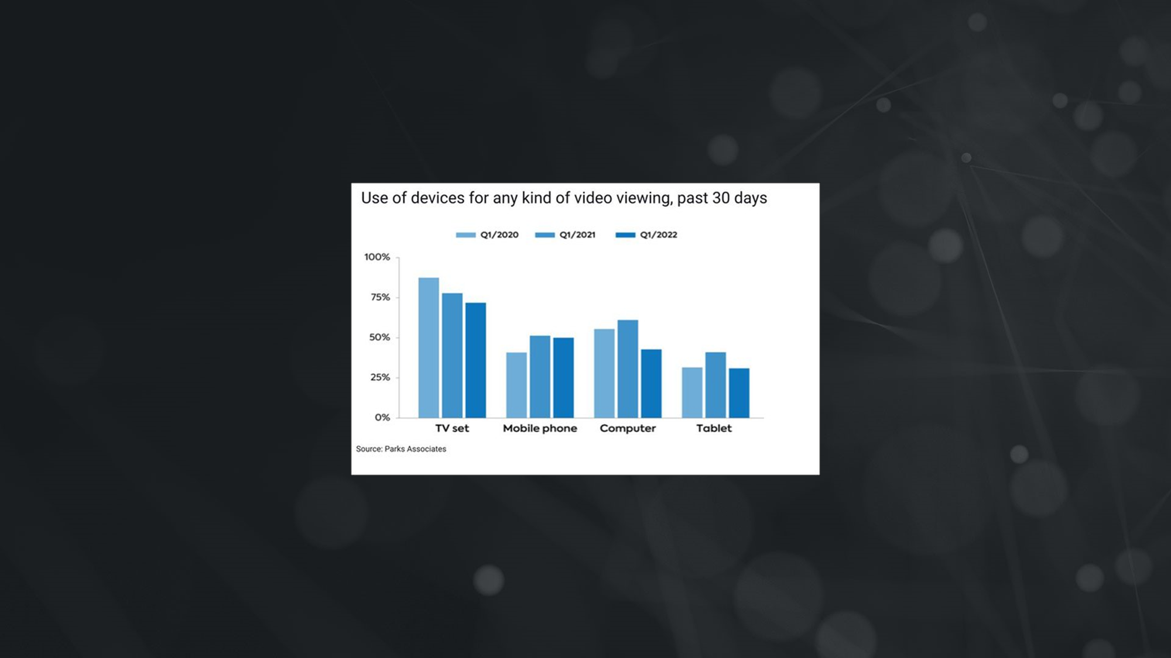 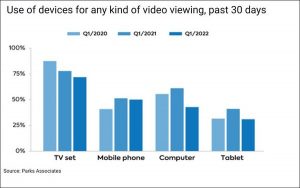 According to data from Parks Associates, TV Sets continue to be the most watched device for video viewing, although the percentages are on the decline.  “As of this year’s first quarter, nearly half of consumers reported watching video on mobile phones within the past 30 days”, a figure that’s relatively flat vs. the previous year. Among those watching video on mobile, AVOD “accounts for the largest share of time spent … nearly two hours”, while SVOD and live streaming account for about an hour per week. Parks Associates CMO says that “the shift between platforms will push the industry to tailor services and content more aggressively to suit mobile phone viewers.” (MediaPost: 12/1/22)

MoffettNathanson’s Cord-Cutting Monitor reveals a 6.3% decline for pay TV distribution in Q3 2022. Pay TV is defined by MoffetNathenson to include “both traditional cable and satellite operators as well as newer vMVPDs like Fubo TV and YouTube TV.” Recent declines in “pay TV subscriptions have been coupled with higher levels of homes using TV antennas” (15% of the population according to Nielsen). While this trend may reaffirm the value of over-the-air broadcasts, stations that rely heavily on “retransmission consent payments from pay TV providers” may face financial challenges. (TVTechnology: 12/2/22)

LOCAL BROADCAST AND THE COMMUNITY

Throughout this year’s hurricane season that affected the southeast, local broadcasters played an important role. “In the cases of (hurricanes) Ian and Nicole, it was the local radio and television broadcasters in Florida, Georgia, South Carolina, and North Carolina who were there for their communities as the storms unleashed their fury.” Since only the local broadcasters and local meteorologists were able to talk to specific neighborhoods, credible information was provided to residents, which helped to locate safe havens, food, and other provisions. Valued and trusted, local broadcasts are “there for their communities for the short and long haul.” (NextTV: 11/30/22)

NextGen TV (previously known as ATSC 3.0) makes cutting the cord easier than ever as it offers sports, local news, network TV shows, and more; all “over-the-air”, from an inexpensive antenna. Rolling out across the country, NextGen TV is widely available and “broadcasting in the new standard” which includes “potentially more channels” and image quality that’s “likely better than what you’re used to from streaming or even cable/satellite. (CNET: 12/7/22)