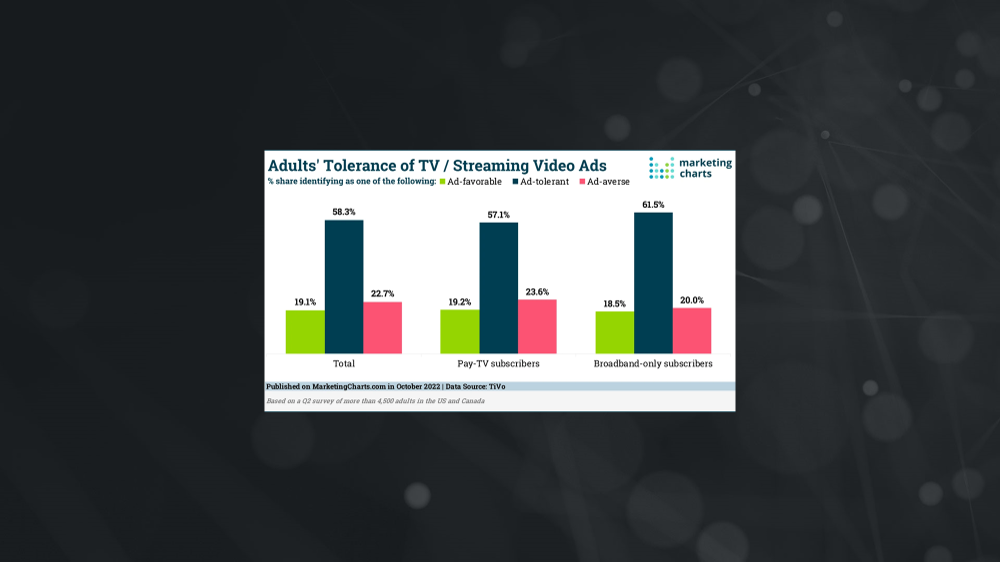 According to the IAB, linear TV will continue its ad inventory dominance for years to come given its “scaled infrastructure, exclusive live sports rights, and the unparalleled ability to attract massive audiences for culturally vital events.” However, they recognize streaming’s power as well. And while CTV will drive growth, cross-platform challenges persist. To work towards interoperability, while keeping consumer privacy in mind, linear and CTV will need to solve universal reconciliation, cross-environment auditability, data interoperability, improve ad validation, and frame accurate ad replacement. Since a common “distribution technology would be impossible”, what’s needed instead s a way to enable common signaling that allows all ads across all television environments to be identified by a specific asset ID and made addressable wherever possible. (AdExchanger: 11/7/22)

In an article on “Converged TV” (not to be confused with connected TV or CTV), the ANA cites CTV’s user growth (68% expected by 2024) and the ease of switching to and from linear “without much thought.” Similarly, when TVSquared surveyed ad buyers across the US, UK, Germany, and Australia, 75% of respondents agreed that “TV is defined as both linear and streaming”. However, linear and digital programming are measured very differently, and “marketers, media companies, and ad-serving platforms are scrambling to develop new models.” Now, for the first time, services that measure across traditional TV, CTV, desktop, and mobile are becoming available. (ANA.Net: 11/4/22) As Netflix has “unveiled its ad-supported tier,” new data from TiVo reports that generally, viewers are tolerant of ads. Out of the 4,500 adults surveyed, “the majority (58.3% share) identified as ‘ad-tolerant,’ while an additional 19.1% share identified as ‘ad-favorable.’” Pay-TV subscribers had just a bit more disapproval toward the ads vs. Broadband-Only subscribers. Overall, “61% of respondents said they actively watch at least one AVOD/FAST service, and 80% wish their paid services offered a free ad-supported option.” (Marketing Charts: 11/3/22)

TV AD SPENDING: FLAT IS UP

“National linear TV advertising remained virtually flat in September”. According to Standard Media Index, it inched up only 0.3% (to just under $4 billion) vs. last year, despite September being “the start of the new TV season and major sporting events” being held. Sports was down with no Summer Olympics this year and no Ryder Cup, along with cable and broadcast. However, Syndication saw a 15% increase; the first 3rd quarter uptick since 2017. (MediaPost: 11/7/22)

Streaming providers are following cable’s lead by offering more bundling options due to cost-conscious viewers. “Bundling with other companies provides lower subscription costs, increases sampling and helps to subsidize the rising costs of maintaining a competitive streaming service and has promotional value.” A rundown of bundles from Disney, Paramount, Comcast, Warner Bros. Discovery, and Google are included. (Forbes: 11/7/22)