Following Nielsen’s accreditation loss in 2021, 2022 saw a rise in new measurement currencies. Adding “more heat and fervor to the measurement race”, Disney+ and Netflix bot went “AVOD”, while NBCUniversal launched an alternative currency “council”, including VideoAmp, iSpot, and Comscore. Meanwhile Nielsen’s launch of Nielsen ONE is set to release this month. Panel-based measurement also took a turn in 2022, which lead to calibration panels that “solve for very specific attribution use cases.” Clean rooms grew in 2022 as NBCUniversal and Disney launched them after Nielsen lost its accreditation and Roku also launched “its own data clean room for measurement and attribution.” (AdExchanger: 12/29/22)

To get an idea of what’s in store for 2023, “a number of prominent industry executives have bravely ventured their thoughts about the future. If nothing else, they provide food for thought”. Innovid’s CTO and founder predicts continued expansion for the streaming industry, higher sports viewership, and “an international shift in streaming”.  And while consumers are looking to spend less to watch TV, Transunion’s Media & Entertainment EVP sees people gravitating towards “mass market subscription streaming services as well as free ad-supported streaming”. Forecasts from execs. At Samsung Ads, Bliss Point Media, Iris.TV, Lotame, and more. (NextTV: 12/31/22)

Christmas in western New York this year was met with a life-threatening snowstorm that left “tens of thousands without power, heat, water and emergency services.” As the national news of the weather “covered the basics,” local news was critical to many. Local media provided the most coverage and context during the storm which reminds people that the “hard facts concerning emergency services, road closures, downed power lines, and the next approaching storm come from dedicated individuals working in local media, living in local communities and working 24/7.” (TVNewsCheck: 12/28/22) 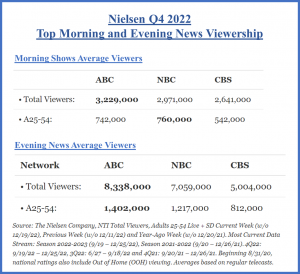 The top morning show for 4Q22 goes to ABC’s Good Morning America. With 3.23 million viewers, it’s the most-watched morning show for 11 years in a row. Among the A25-54 demo, Today earned the number 1 ranking with 2.97 million viewers, while CBS Mornings was the number 3 show in both total viewership and adults 25-54, averaging 2.64 million total viewers. ABC World News Tonight with David Muir was the number-one evening newscast for the fourth quarter of 2022. ABC’s 4Q evening newscast averaged 8.34 million viewers; averaging “the largest total audience for the last 23 quarters—since Q2 2017.” The show also won 4Q22 across key demos, including A25-54. In second place, NBC Nightly News with Lester Holt averaged 7.06 million viewers and saw the “largest increases compared to other evening newscasts versus the summer.” CBS Evening News with Norah O’Donnell averaged about 5 million total viewers and 812,000 adults 25-54 in Q4 of 2022. (Adweek: 1/3/23, 1/4/23)

Following Barbara Walters’ passing on Friday 12/30/22 at 93 years old, female journalists praised her “for breaking the glass ceiling for women in broadcast journalism and helping others succeed along the way.” Walters started her career in 1961 on NBC’s TODAY show where she became the only female producer and first female co-host of the show then later became the first female anchor of a network news program at ABC. Anchors such as ABC’s Diane Sawyer, NBC’s Andrea Mitchell, and TODAY hosts Savannah Guthrie and Hoda Kotb are just a few of those who expressed their sadness yet appreciation for Walters, naming her a “trailblazer,” “role model,” “mentor,” and “legend.”  (NBCNews: 12/31/22)