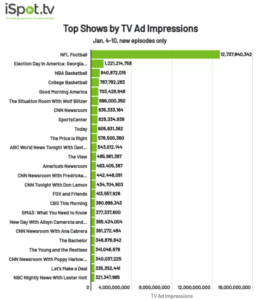 iSpot.TV took a snapshot of TV viewership for the week of Jan 4th -10th, revealing the most-watched new episodes of shows and networks. The wild card filled weekend of the NFL and the historic events at Capitol Hill drove viewership for NBC and CBS, along with cable news network’s CNN, Fox News and MSNBC move up in the ranking.  Early morning shows like GMA, CBS This Morning, and The Today Show were included on the list, as were daytime favorites, The View, The Price is Right, and The Young and the Restless, among others. The “TV By the Numbers” article also looked at the most watched shows and networks by share duration using Vizio Inscape data. Similarly, broadcast sports and news across all dayparts led the week, with inclusion of a few police dramas and one classic sitcom.  (NEXTTV: 1/11/21)

A TV Watch commentary describes the safeguards that TV networks and stations put in place to address marketer concerns during highly intense news periods. First, during the most intense times, networks and stations shifting to nonstop journalism with no advertising. This can be an immediate decision with commercial messaging stopping on a dime. And it’s aligned with marketers who don’t want to be near highly emotional situations. During the siege of the U.S. Capitol, cable TV news networks, as well as big TV broadcast networks, avoided advertising, while from a content perspective, social-media platforms such as Facebook and Twitter took action against politically tinged, but not truthful content. “TV networks have it somewhat easier”, as they control the content themselves. (MediaPost: 1/8/21) 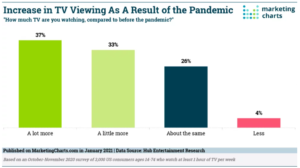 One consumer behavior trend that shows no signs of returning to pre-COVID levels any time soon is the increase in the amount of TV people are watching. A November 2020 survey from Hub Entertainment reports that US viewers are watching a lot more TV than they did pre-pandemic and has not changed since July. Although US households that subscribe to SVODs continue to rise (34% in Nov. vs. 28% in July), 23% of respondents reportedly dropping a service (including vMVPD and MVPD) in November, compared to 18% in July. With the increase in TV viewing and streaming, consumers are also buying more Smart TVs. Research from Conviva found the use of Smart TVs to stream video increased by 200% year-over-year in Q3 2020. With most cinemas closed and many releases postponed, 24% of respondents have paid to purchase first-run movies that skipped the theater to watch at home, up from 19% in July. (Marketingcharts: 1/8/21)

KATIE ON JEOPARDY! AND A TRIBUTE TO ALEX TREBEK

Katie Couric has signed to take over the hosting reins of “Jeopardy!” for a week. Couric will be among the first guest hosts to helm the iconic game show. As the show continues without longtime host Alex Trebek. Producers plan to have guest hosts until a permanent replacement is named. (LATimes: 1/6/21)  And finally, fans got to say farewell to Alex Trebek, the beloved Jeopardy! host through a video tribute. It’s “a lighthearted and laughter-filled remembrance showing Trebek’s changing look through his 36 years as host.” Also, sad and sentimental, the tribute celebrates the wackier show moments and closes by showing Trebek through the decades with his signature sign off through, “So long, everybody.” (TVNewsCheck: 1/9/21).