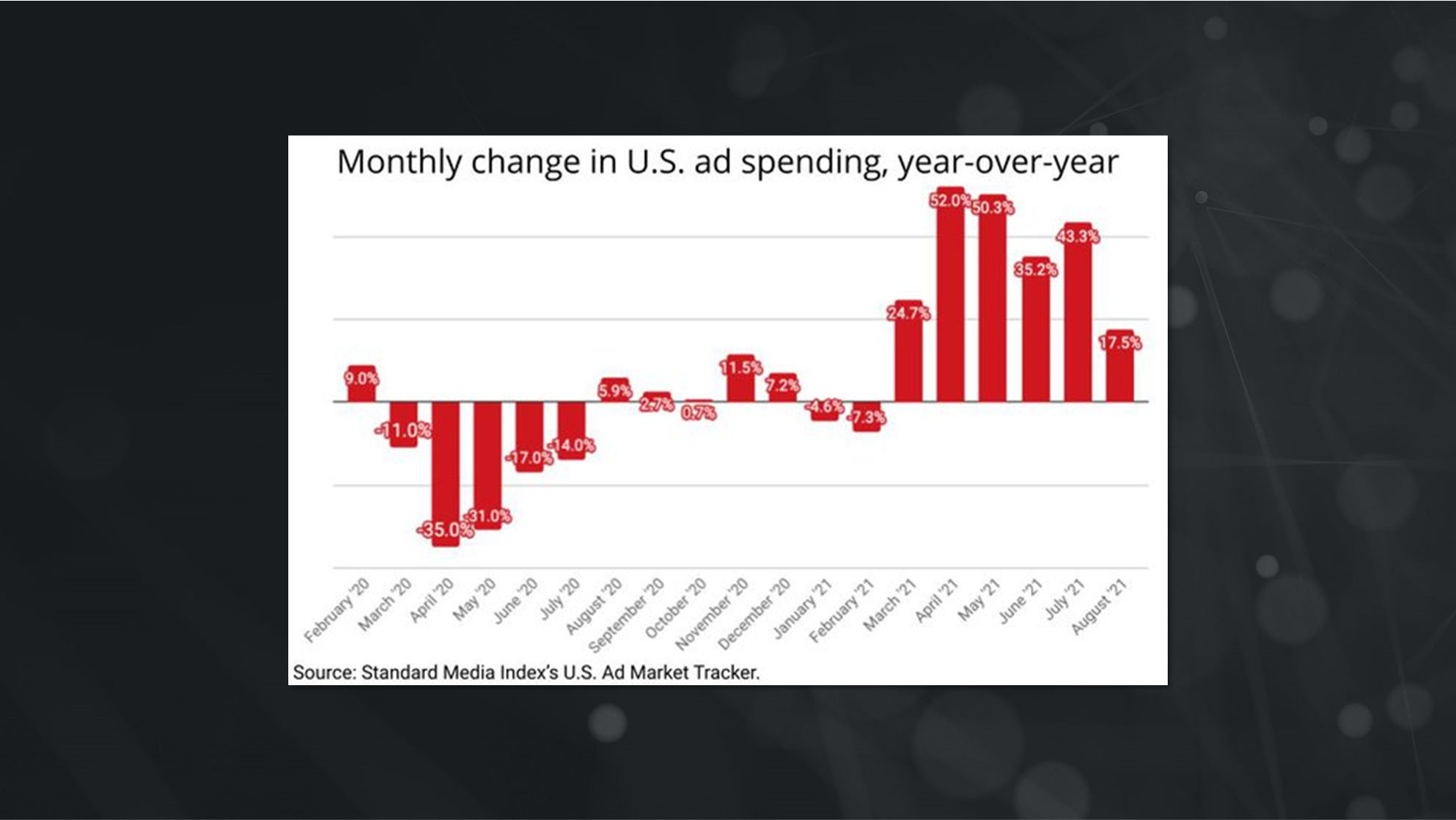 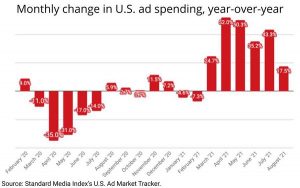 The US ad economy expanded in August, albeit at the slowest rate in the last six months (17.5%), fueled primarily by smaller advertisers, according to Standard Media Index’s latest US Ad Market Tracker. This is due to a comparison to August 2020, which was the first month to see growth after the ad-spending recession brought on by the pandemic. Ad spending is also up 16.7% when compared to August 2019. Traditionally a week month for network TV, August national TV advertising marketplace declined 2.2%, while digital increased 35.6%. (MediaPost: 9/22/21)

The latest research from Pitney Bowes indicates that the “Delta variant will fuel holiday e-commerce boom.” Comparative findings to May 2021 show that the Delta variant of the COVID-19 virus already has a significant impact on consumer shopping behavior; well before the peak shopping period. The September report showed that one in three will start shopping more online (a 19% increase from May). Further, one in four will start shopping less in person; a 16 increase from May. “Last year, online was consumers’ favorite holiday shopping destination” and the data shows that “consumers are defaulting back to their new comfort zone.” (Chain Store Age: 9/24/21)

A TVision report, also released at the recent ARF conference, showed that “commercial wear-out isn’t just about too much frequency of viewing spots, but also about the time duration between when those messages run.” For CTV/OTT platforms airing the same commercial within five minutes apart, viewer attention, measured as “eyes on the screen”, lasted only 8 seconds (25% of the time). When the commercials were spread across five minutes or more, attention increased by 14%. The study also found that “Attention to TV ads increases uniformly through the first 10 attentive ad exposures” with peak levels occurring at 11 to 15 exposures. After which, the measurement company encourages marketers to switch creative. (MediaPost: 9/22/21)

ABC, CBS, CNN, FOX, and NBC are all “stepping up their streaming news operations”, a flurry of activity that “indicates how streaming is becoming more central” to their news organizations. This is in addition to each network’s increase in original streaming programming and Fox and CNN launching new services. Visible steps at ABC include a plan to hiring an “svp of streaming” and increased production, according to an internal memo, while over at CBS, their new streaming service, CBSN will adopt the CBS News name later this year. NBC sees growth with plans to fill 200 positions over the next year, most of which will support “NBC News Now’s growing streaming operations.” (Digiday, requires sub.: 9/22/21)

Marketers of a certain demographic will surely remember the classic Wendy’s commercial “in which a gravelly-voiced old woman shouts, ‘Where’s the beef?’, at the sight of a puny hamburger patty in an oversized bun.” Cliff Freeman, award-winning copywriter and creative director of that spot and many other memorable commercials, died on September 5th, at 80 years of age. Mr. Freeman’s agency, Cliff Freeman & Partners, “consistently produced some of the funniest, smartest ads on TV”. Other recognizable work included “Pizza! Pizza! For Little Caesars (in which “he scripted and voiced the toga-clad Roman gnome.”) and the 2009 ad for online retailer Outpost.com where gerbils (not real ones) were fired from a cannon; attempting to go through the second “o” in the company logo.  (New York Times: 9/25/21.)